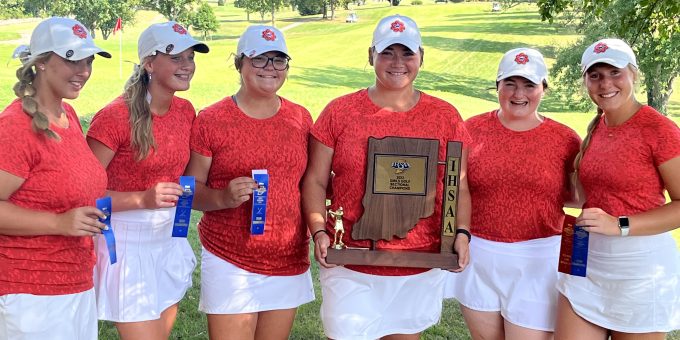 BEDFORD – On the grading and judgment scale, both in terms of aesthetics and execution, No.17 Bedford North Lawrence rates a perfect ‘10’ with another coveted championship. That trophy, and the smiles that accompany it, is certainly a thing of beauty.

For the 10th consecutive year, the Stars kept the IHSAA sectional title for themselves, winning the team crown on home turf and advancing to the second stage of the state tournament series. BNL, peaking at the perfect time for the postseason, cruised to the championship at Otis Park on Saturday afternoon, earning admission to the next level.

With outstanding performances from deep in the lineup, the Stars fired a team total of 327, qualifying for the regional at Country Oaks without challenge. Seymour was a distant second at 385, while Springs Valley claimed the third and final spot with 407. The only thing to escape BNL’s grasp with the individual medalist honor, which Seymour’s Lainey Jackson earned with a sudden-death playoff victory over BNL’s Chloe McFaddin on the first hole.

BNL’s historic run of titles is starting to threaten the state record (14, set by Twin Lakes from 1998-2011). That’s a few more years of nervousness and pressure. Right now, even though the Stars were overwhelmingly favored to repeat, the self-induced stress to continue the tradition spurred them to another level and another victory.

“It’s pretty awesome,” BNL coach Kori Johnston said, now that she’s authored the last two of the streak, as her team won the 17th in program history. “There’s pressure every year, we always want to get it., But that feels pretty good.”

They rose to the occasion. Chloe McFaddin, fighting back tears as a recurring painful hip and back problem flared on the back nine, played the final three holes in 1-under to finish with an 80 and make the playoff. Ellie Horton, who got robbed by a nasty spin-out on her par putt on the final hole, shot a career-best 81, and freshman Kinleigh Root also bogeyed the last but still posted an 81. That would have been a crowded playoff.

Not to be outdone, senior Nora Howat fired a career-best 85, matched by teammate Kenley Craig. Some of them had not been playing to that standard in recent matches, yet they were unfazed when the spotlight intensified for the postseason.

“I knew if I didn’t play well, it would have been one of the worst feelings ever,” Horton said. “I wanted to go out with a bang. I was getting frustrated, I‘ve even really nervous the last couple of weeks. I wasn’t sure how it would go. I didn’t want to play like I have been, so I put the past behind me.”

Horton had birdies on the fifth and 10th (hitting an iron to two feet on the short par-3 test). That last putt from 8 feet on 18 was spat out of the hole like a dental rinse, just a shocking turn for what looked to be a perfect stroke. Root birdied the fifth and 17th holes.

McFaddin’s day also started with a jolt. After pulling her tee shot on the par-5 fifth, he topped an iron second shot into trouble, clanked a punch off a tree root and walked away from the easiest hole with the worst of results (a dreaded double-bogey). Her birdie on the difficult eighth and her clutch finish (including a birdie on 16) got her back on track.

Jackson won the playoff with a solid up-and-down par, while McFaddin three-putted from 25 feet above the hole on the slick green.

“My first putt definitely could have been better, I was a little shaky walking out there,” McFaddin said. “I was really stressed out last night. I try to keep the stress level high the night before so I’m chill the next day. I wanted to finish strong. My body didn’t, but I did.”

“We just play well on 18 holes,” Johnston said. “We really like having that to get the round put together. They really played well on the front. We just tried to stay strong. It was a long day, not every shot will be great, you’ll get tired.”

BNL hasn’t gotten tired of winning. Now the next test will be qualifying for the state finals. The top three teams in the 15-team regional will advance to the finals at Prairie View on Sept. 30.

“We have good vibes going into Country Oaks,” Johnston said. “I think we’ll be a contender.”

The top three individuals who were not members of advancing teams also qualified for the regional, that list including Eastern Greene’s Kenady Hudson (93) plus Brownstown’s Gracie Reynolds (96) and Emma Hughbanks (103).