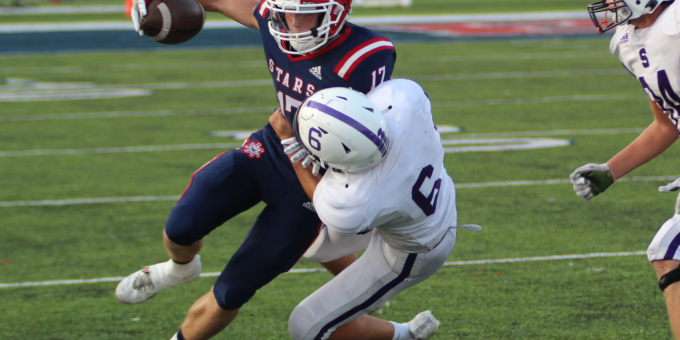 BEDFORD – A tire without air. A big-screen television. Bread without leaven. Terrain without hills. The category, Alex Trebek? What are flat things. Include Bedford North Lawrence on that list. And now the potential Hoosier Hills Conference title is in jeopardy.

With so many positive factors in their favor – a two-game winning streak, a Homecoming celebration, and the league lead – the Stars had everything to play for. Which makes the Friday night performance even more inexplicable and disappointing as Seymour ruined all that momentum with a dominating defense and a defining triumph.

Bret Perry threw two touchdown passes, Nick Wheeler ran for 107 yards, and the Owls smothered BNL’s offense like a wet blanket on a fire, reducing the flames to harmless smoke as Seymour pounded out a 27-6 victory. After ending a scoreless battle with two touchdowns in the final two minutes of the first half, the Owls scored on their first two drives of the second and left the Stars holding a bouquet of wilted flowers for the dance.

After two impressive road wins put them in prime position, BNL came home and fell down. And couldn’t get up. Steamrolled asphalt, pressed leaves in a textbook, road kill on the highway. Alex? More flat things. Correct.

“It was pretty flat,” BNL coach Derrick Barker said. “There were a lot of opportunities to make plays that we just didn’t make. It’s disappointing. I felt we just couldn’t connect.”

From Seymour’s standpoint, the category was Win the Game, and the answer – in the form of a question – was: Why did it take so long? After four worthless possessions, they were scuffling when lightning struck twice. The first thunderbolt was a 63-yard connection from Perry to Kyle Hileman, who made a catch over the deep middle, slid off a tackler and raced past two more on his way to the end zone with two minutes left in the half.

The second was a real killer. After three incomplete passes from the Stars, Seymour took over at its 15 with 1:13 left. Enough time? The answer, Alex? What is four plays in 36 seconds? Perry scrambled for five, Wheeler raced for 10, Perry found Jack Pennington for 28. And then, on a reverse pass that caught the Stars flatfooted, receiver Will Gray lofted a 42-yard touchdown to a wide-open Pennington for a stunning 14-0 lead at intermission.

“You could feel the momentum was up for somebody to grab,” Barker said. “Unfortunately we made the mistakes, some missed tackles and a blown assignment on the second. You give them two quicks ones, in a game that’s neck and neck like that, it’s huge.”

“We can’t be an offense that lives on trick plays,” Seymour coach Tyson Moore said. ”But, they’re there when we need them. They put us in a great place and set us up for a great second half.”

Seymour seized control with the opening drive of the third quarter, 80 yards and 5:35 of bully ball. Moore challenged his offensive line at halftime, and the message was received. Perry hit Gray for 23 yards, Wheeler rolled 16 yards to the red zone, and Cam Wheeler muscled over from 10 yards for a 20-0 lead.

“They just bullied us,” Barker said. “We threw everything we had at them but we weren’t able to get a stop.”

BNL (2-3 overall, 2-1 in the HHC) finally answered with its only score. Cal Gates had four impressive runs, Louden dashed 13 yards for a first down, then hit Ryker Hughes with a 26-yard touchdown pass with 3:03 left in the third. But that change didn’t last long as Seymour responded with another 80-yard march, capped by Perry’s 34-yard strike to Pennington (on fourth down) for the clinching score.

Perry was 13 of 22 for 214 yards with the two scores. Pennington had 6 catches for 140 yards with both TDs. But the real Seymour heroes were the defenders. The Owls gave up only one long drive in the first half (which ended with a missed field goal) and only 166 rushing yards. Louden was 9 of 25 passing for 139 yards.

“We had to work for that one,” Moore said. “Defending them is very tough. They do a lot of good things. We kept the quarterback contained, for the most part, we contained the handoffs, and we tackled. We didn’t allow them to beat us in the air, either. I was pleased with how the defense played. We made plays when we had to. It was about keeping our composure and doing what we do best.”

Seymour (3-2 overall, 3-1 in the league) forced a reshuffle of the league race. “We’re not in the driver’s seat, but we’re in the front seat,” Moore said, liking that view.

BNL can still contend for the league crown as well, but winning at home has to be part of that equation. The Stars are now a perplexing 4-13 at BNL Stadium over the last three-plus seasons.

“If we can take care of business, a lot of our goals are still attainable,” Barker said. “But that’s looking ahead. We have issues to fix.”

The Stars will visit Jennings County next week.