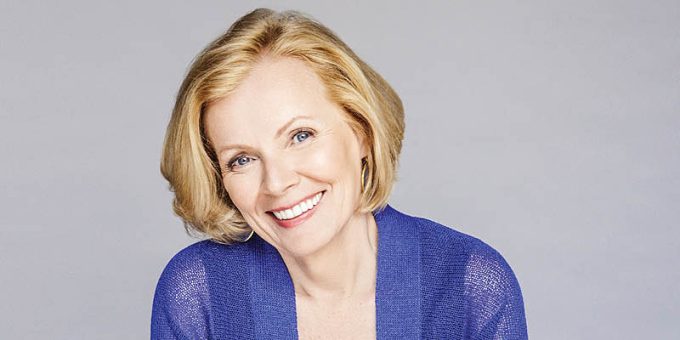 WEST LAFAYETTE – Pulitzer Prize-winning opinion columnist Peggy Noonan has been called the “voice of our times,” and her powerful and poignant commentaries and books are described as “a love letter to the American political process.”

Noonan brings her pointed pen and gift of giving presidents their words to Purdue University’s campus for the next Presidential Lecture Series event with President Mitch Daniels at 6 p.m. on October 17th in the Stewart Center’s Fowler Hall.

The event is titled “Columnist Peggy Noonan on Culture, History & Life in Our Times.” Sponsored by the Purdue President’s Council, the event is free and open to the public and also will be livestreamed.

“For years now, Peggy Noonan has been a unique and essential voice in our national discourse,” Daniels said. “She sees things others have overlooked and says things clearly that others have thought but struggled to express.

“She has defined and defended endangered standards of grace, civility, and character in her columns and in her own life. I have long been her faithful reader and student, and I’m fortunate to say her friend, and I look forward to welcoming her to Purdue.”

An opinion columnist and observer of culture at The Wall Street Journal since 2000 and a political analyst for NBC News, Noonan’s columns have touched on subjects ranging from American culture to theater and movies, and the topical and political issues of the day. Noonan was awarded the Pulitzer Prize for Commentary in 2017, the highest annual honor in published journalism, for her regular column, “Declarations.”

Pulitzer jurors said Noonan had risen to the moment leading up to the 2016 presidential election between Donald Trump and Hillary Clinton “with beautifully rendered columns that connected readers to the shared virtues of Americans during one of the nation’s most divisive political campaigns.”

Forbes magazine has hailed her columns as “principled, perceptive, persuasive and patriotic.”

She has written nine books on American politics, history and culture, from her most recent, “The Time of Our Lives,” to her first, “What I Saw at the Revolution.” She also is one of 10 historians and writers who contributed essays on the American presidency for the book “Character Above All.”

Noonan was a special assistant and speechwriter for President Ronald Reagan. In 2010 she was given the Award for Media Excellence by the living recipients of the Congressional Medal of Honor; the following year, she was chosen as Columnist of the Year by The Week.

Following the space shuttle Challenger explosion on Jan. 28, 1986, she wrote Reagan’s address to the nation, drawing from poet John Magee’s consoling words about aviators who “slipped the surly bonds of earth … and touched the face of God.” It is ranked as the eighth best American political speech of the 20th century, according to a list compiled by professors at the University of Wisconsin-Madison and Texas A&M University.

Before entering the Reagan White House, Noonan was a producer and writer at CBS News in New York and an adjunct professor of journalism at New York University. She also has been a fellow at Harvard University’s Institute of Politics and has taught history at Yale University. She holds honorary doctorates from Adelphi University, St. John Fisher College, Miami University and her alma mater, Fairleigh Dickinson University in Rutherford, New Jersey.

Noonan was born in Brooklyn, New York, and grew up there, in Massapequa Park, Long Island, and in Rutherford. She lives in New York City. In November 2016, she was named one of the city’s Literary Lions by the New York Public Library.

Purdue University is a top public research institution developing practical solutions to today’s toughest challenges. Ranked in each of the last five years as one of the 10 Most Innovative universities in the United States by U.S. News & World Report, Purdue delivers world-changing research and out-of-this-world discovery. Committed to hands-on and online, real-world learning, Purdue offers a transformative education to all. Committed to affordability and accessibility, Purdue has frozen tuition and most fees at 2012-13 levels, enabling more students than ever to graduate debt-free. See how Purdue never stops in the persistent pursuit of the next giant leap at https://purdue.edu/.