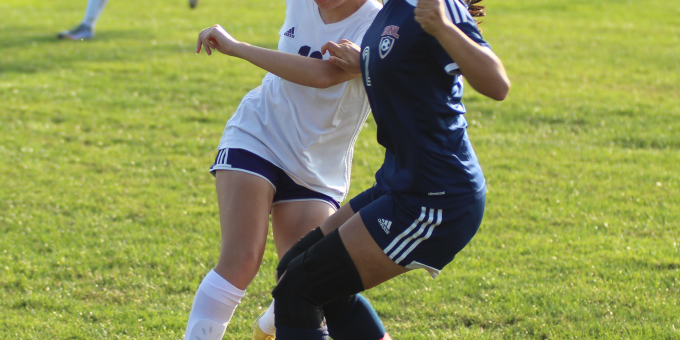 BEDFORD – Before she ever wore a Bedford North Lawrence uniform, Alice Bair paid a heavy price. Torn up her left knee and left elbow. And by golly, if that’s what it takes, she was going to get her money’s worth.

She made it, four years of struggling. Three coaches during her career. Very few wins. That didn’t matter when she walked to midfield, parents at her side, for her Senior Night moment. She played with more body armor than a SWAT team member, and a noticeable limp. She’s a true testament to toughness.

Bair and classmates Elizabeth Hounshell, Samantha Biel and Lily Dusard were honored prior to Thursday’s clash with Seymour. The Owls buzzed to a 7-0 win, although the winless Stars (0-8-0 overall, 0-5-0 in the Hoosier Hills Conference) made them go the distance.

Going the distance was Bair’s battle cry. Her team has lacked success, but that hasn’t dampened her spirit.

“I realized I had to stick it out,” Bair said. “If I’m going to hurt myself for a sport, I have to stay with it. I know we haven’t won very many games, and I don’t care if I come back and see a sectional trophy. I just want to see a successful program. I feel like I’m a leader by example, and I try to do the right thing.”

Biel, who has dabbled in several sports (golf and wrestling) at BNL, and Dusard are one-year wonders who could have benefitted from a longer tenure in the game. Hounshell has suffered her own injuries and offered morale as her contribution. BNL coach Bret Roberts appreciated their donations to the game.

“Alice is a player any coach would want on their team,” Roberts said of her longest-serving senior. “She listens to everything, she wants to please you and do exactly what you want. I’ve seen so much improvement from her.”

During the contest, Seymour (6-4-0, 3-1-0) struck in spurts. The Owls scored three times in the first eight minutes of each half. Nicole Rebber and Irene Martinez had two goals each, while the other scores came from Rachel Lenart, Kate Connell and Rochiely Zarate-Gibson. BNL had a great chance, but Sydney Hallatt’s penalty kick late in the first half sailed wide left.

“It wasn’t too bad,” Roberts said. “I’m pretty happy we played the whole game. That’s something to be proud of against a tough team like that.”

The Stars will host Jeffersonville on Saturday.