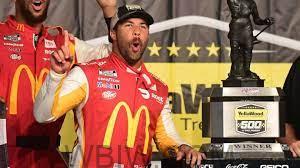 KANSAS – Bubba Wallace who took over the seat for the series playoffs as Kyle Busch continued to recover from a concussion — put together a big Stage 3 for his second career Cup Series win. The 28-year-old outpaced 23XI Racing co-owner Denny Hamlin to capture the checkered flag to win the race.

Wallace regained the lead on Lap 225 after the final cycle of green-flag pit stops at the 1.5-mile track and stayed out front for the final 43 circuits as his car owner, Denny Hamlin, chased him to no avail. Wallace crossed the finish line exactly one second ahead of Hamlin.

“Just so proud,” said Wallace. “Pit crew was awesome today. We had one loose wheel. Just thankful. Thanks for the opportunity, and thankful to shut the hell up for a lot of people.”

Wallace was the 18th different winner in the 28 NASCAR Cup Series races run this season.

There were nine caution periods for a total of 43 laps. Only 16 of the 36 drivers in the Hollywood Casino 400 finished on the lead lap.

Harvick’s No. 4 Stewart-Haas Racing Ford was running in tight quarters behind the No. 1 Chevrolet of Ross Chastain and the No. 45 Toyota of Bubba Wallace in the 33rd of 267 laps in the Hollywood Casino 400. When Chastain and Wallace drifted up in front of his car at the exit of Turn 4, Harvick’s car broke loose and walloped the outside retaining wall.

“When those two cars came up in front of me I just got super tight,” Harvick said. “When I lifted, it grabbed and got loose. I just wasn’t expecting them to come up and my car getting that tight.”

Harvick limped his car back to pit road, but the damage was too severe for him to continue. He will finish last in the 36-car field.

That outcome, combined with his 33rd-place result in last weekend’s playoff opener at Darlington, placed him at a sizable deficit in his quest for a second Cup Series championship.

“Yeah, it is what it is,” Harvick said. “We were racing to win anyway today, so that is what we will do again next week.”

Harvick is the only driver who has competed in every NASCAR Cup Series race at Kansas, a run of 34 races dating back to the inaugural race on Sept. 30, 2001.

“For us, we definitely started off with our balance way different than in practice. I was worried at the beginning, but our team did a good job of making good adjustments and good pit stops, and good restarts to get us up to fourth or fifth there,” said Chase Briscoe, driver of the No. 14  Magical Vacation Planner Ford Mustang. “We were able to run top-five if we could maintain track position. We came down pit road and the 51 (Cody Ware) just buried us and pinned me in. I couldn’t get around him and we went from running fourth to running 15th and I was stuck there the rest of the day. I wish we could’ve gotten our Magical Vacation Planner Ford Mustang up there. I feel like we had top-five speed, we just needed the track position to go with it, and we weren’t quite good enough to drive back through the field again. Going to Bristol not in on points isn’t the end of the world. I would love to be nine points up, obviously, but being nine points out, I feel like we can go there and get some stage points and be in good shape.”

Aric Almirola led once for three laps to increase his laps-led total at Kansas to 72.

“I thought we had a really good car. Having a motor issue in practice and not getting to qualify really just put us behind because we got given the last pit stall – I was having to come around the 12 (Ryan Blaney) and I kept getting blocked in by the 42 (Ty Dillon). So every time we’d drive from 30th up to 15th, we come down pit road and get blocked in and have to restart 30th,” said Aric Almirola, driver of the No. 10 Farmland Ford Mustang. “We restarted 30th one too many times, and I got wrecked on a restart and got a lot of damage, and the car was never as good after we got all the damage.”

Playoff Standings (with one race to go before Round of 12):