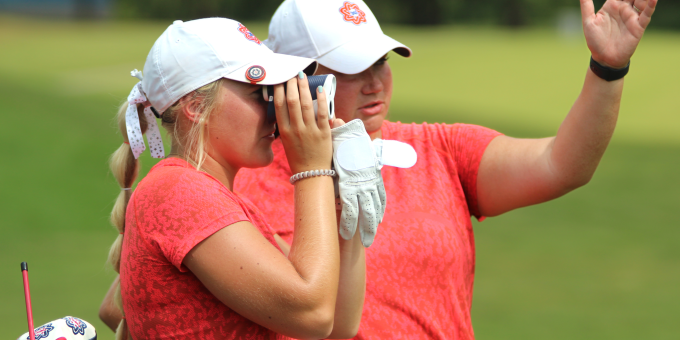 BEDFORD – Brotherly love still exists, at least in a crisis.

When her putter self-destructed during the middle of the Hoosier Hills Conference tournament at Otis Park, with the handle breaking apart and hanging limp like a wet noodle, Bedford North Lawrence freshman Kinleigh Root was allowed to replace the broken weapon. Given her brother’s club, she shook off any possible anxiety from the mishap and helped the Stars collect some prizes on Saturday afternoon.

Root and the No.17 Stars finished second in the conference clash, posting a season-best team total of 326. No.12 Floyd Central won the championship with 308.

With Chloe McFaddin earning All-HHC honors, with Root among the Honorable Mention crowd, the Stars posted scores that have been expected, rather than excused or apologized for. They couldn’t defend Floyd’s top-heavy firepower, but there was no shame in the red ribbons.

“I’m very satisfied,” BNL coach Kori Johnston said. “That’s the best we’ve shot all season, by nine shots. We’ve definitely improved a lot. They came through. That’s one thing I’ve been impressed with all of them, their mental game. It was our job to stay strong all the way through.”

Everyone faced some adversity. For McFaddin, after two early birdies, it was shaken confidence in her putter to start the back nine. For Root, whose swing has been a work in progress of late, it was the fact her putter crunched and broke apart in her hands. Nothing fazed them.

McFaddin birdied the fourth and fifth holes to make the turn in medal contention, then three-putted the 10th and struggled to forget about that slippage. She bounced back with a two-putt birdie on the par-5 17th and fired a smooth 79 to finish among the top five for HHC recognition.

“I was feeling good on the front,” McFaddin said. “On the back, it kind of fell apart. But we came through. It was a little rough, but we made it. I came out trying not to be stressed out. I tried to picture it like a normal match. If I started thinking about the end result, I would start stressing out and messing up.”

Root could only laugh when her putter snapped. That was funny, but her recent struggles were not. She got the swing issues straightened out in time for an 81.

“I’ve been in the process of having to get bad to get good,” Root said. “I’m rebuilding right now, but it’s getting better.”

Floyd’s Paige Giovenco birdied the 18th to close an impressive 1-under 71 and wrest medalist honors away from teammate Chloe Cook by one shot. Other members of the HHC First Team included Jennings County’s Sophia Curry (76) and Seymour’s Lainey Jackson (80).

BNL is headed into the home stretch of the regular reason. The Stars will host Mitchell on Monday, the start of the final phases in preparing for the IHSAA sectional at Otis on Sept. 17.