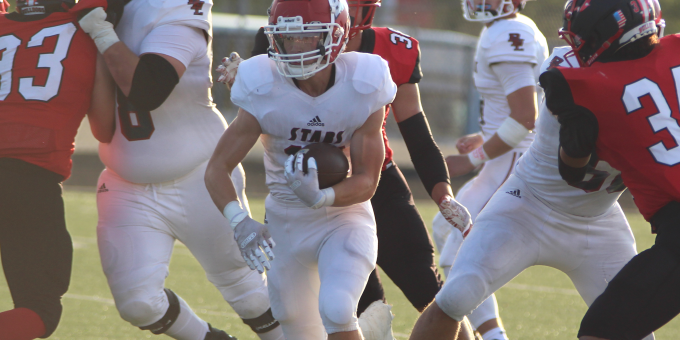 NEW ALBANY – When the Gates swung outward, Bedford North Lawrence exchanged its star-crossed offense for a Starry crown, a joyous road victory that was filled with praise.

Cal Gates, unleashed to glory, smashed through New Albany’s defense like the tide hammering the beach, powering the Stars to the top of the Hoosier Hills Conference with a terrific 45-21 triumph over New Albany on Friday night.

It’s the old, old story. When in doubt, run the ball. With the offense stagnant for the bulk of the first three weeks, the Stars went basic, with fantastic consequences. Gates exploded for 270 yards and three touchdowns, and his electric dashes opened the door for the rest of the attack to finally shine. For this day, BNL was yearning.

Gates erupted for an 80-yard score on his first touch, added sensational runs of 49 and 53, averaged 14.2 yards per carry. There’s no doubt BNL (2-2 overall, 2-0 in the league) found its running back. And rediscovered its foundation. Run the ball, stop the run, win the game. That’s the formula.

”We started to show what our potential can be,” BNL coach Derrick Barker said.

That is limitless, if the offensive line can generate that kind of power game. Gates, for all his thunder, was quick to deflect deserved accolades and sing the praises of the thundercats up front. Once they shoveled a path, he cut to daylight.

“Definitely up front,” Gates said. “The line was giving me holes, you could put a whole semi through there. It was massive. I saw the gap, hit it.”

From the first snap, Gates was loose. The first snap was an 80-yard blast, a simple handoff that broke big when Gates spotted blocks from Junior Arelleno, Jace Manuel and Garrett Hayes. Once he got into the secondary, only the safety was left to stop him. Gates won that footrace for a fast 7-0 lead.

New Albany (1-3, 1-1 in the HHC) took a brief lead with consecutive scoring drives with its high-tempo, quick-snap running game. Sophomore quarterback Kenneth Watson, who rarely missed, connected with Gavin Rand for 22 yards, and Elijah Jennings did the jolts from there, carrying seven straight times for the final 23 yards and a touchdown at 3:24.

The next possession was a quick strike, with Watson finding Amarie DeJesus for a double-move route to break clear on a 58-yard score and a 14-7 advantage. But from that point, BNL muscled up.

The Stars pulled even as Memphis Louden hit Dylan Nikirk for a 26-yard pass, then capped off the march with a 17-yard option run to the right corner of the end zone. BNL took the lead for good on a brilliant drive, covering 98 yards in six minutes. The key was the turning-point play of the night. On third-and-28, after two holding calls, Gates busted through traffic and rambled 49 yards. He later scored from the 8 with 1:10 left in the half.

In the third quarter, BNL started to pull free. Gates – again – did the damage with a 53-yard touchdown run. After the Bulldogs stayed within striking range with a 28-yard touchdown from Watson to Chase Loesch (on fourth down), BNL came back with two huge passing connections. Louden rolled right out of trouble and found Trace Rynders for 55 yards, and he hit Ryker Hughes for the 13-yard TD and a 35-21 lead.

The final points were set up by turnovers. BNL recovered a fumble that led to Billy Cline’s 22-yard field goal, and a second fumble was capped by Nikirk’s 2-yard plunge.

BNL, with Gates opening the floodgates, totaled 346 yards on the ground – as much as the previous three games combined. Gates had only 68 yards in that trio of contests, so New Albany can be excused if he was missing from the scouting report.

“When we needed a play, we made plays,” Barker said. “It was a phenomenal job by the offensive line, and our perimeter guys blocked. Some of those runs, they extended, and Memphis did a great job in the option game. We knew it would be a physical game. It was just going back to what we know, what we practice. We’ve gone back to triple option. It’s not the modern way of playing football, but it’s what these kids know. It’s a great tool to have.”

Watson was 10 of 11 passing for 161 yards, but New Albany totaled only 98 rushing yards (on 45 carries). BNL’s 45 points were just two shy of the first three weeks combined.

“All three phases, I was tickled to death,” Barker said. “It feels great. We’re starting to see what we can be. We have to keep it rolling. We feel good about ourselves right now.”

“It feels fantastic,” Gates said. “It was a great team win.”