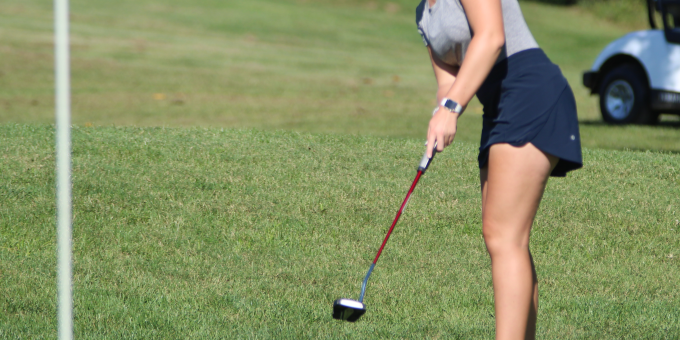 BEDFORD – In the final warm-up round before the Hoosier Hills Conference tournament, No.17 Bedford North Lawrence warmed to the task of improving.

The Stars, paced by Chloe McFaddin’s fabulous start and Kinleigh Root’s consistency, posted a 175-223 victory over Brownstown on the front nine of Otis Park on Thursday afternoon. That sets the tone for the conference battle – also on the home course – on Saturday.

McFaddin coaxed home an eagle putt from the fringe on the fifth hole and followed with a birdie on the par-5 sixth. Those were her first two holes of the day, although that torrid pace wasn’t maintained as she fired a 2-over 39. Root had four pars and five bogeys while carding 42.

“Chloe was back to her normal, dependable self tonight, which is great,” BNL coach Kori Johnston said. “She hits the ball really well for the most part, and does a good job of self-diagnosing her problems on the course, which helps her recover quickly from any bad shots or bad holes.

“Kinleigh played much better tonight as well. Her swing is improving and she’s gaining distance with it. So we just need to work on figuring out her new yardages on her clubs, and she’ll be solid.”

Kenley Craig and Nora Howat completed the scoring for the Stars with 47s.

“It was definitely a better score tonight, but we still have a little work to do before we play on Saturday,” Johnston said. “We are paired with New Albany and Floyd Central in the conference and I’m expecting it to be a good match. Those two teams are competitive with us and have good players on their rosters, just like we do. We have the home course advantage, so if we can come out and put up four good scores like I know we can, I believe we have a shot at winning it.”