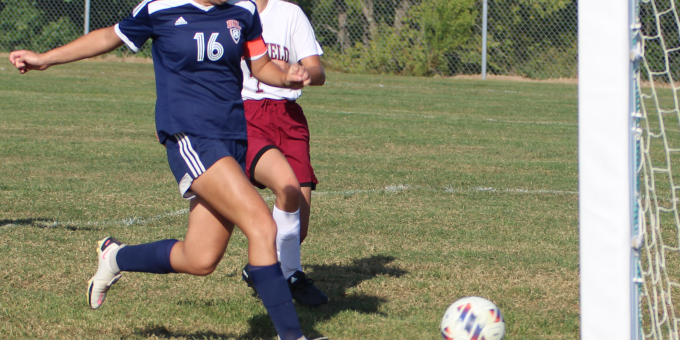 BEDFORD – The spirit of fairness and sportsmanship, noble stances in the face of the win-at-all-cost mentality, cost Bedford North Lawrence a rare victory.

The Stars, struggling to end an 18-match winless streak, were in position to terminate that skid, firing to a 2-0 advantage at intermission. As Bloomfield lost multiple players to injuries in the first 20 minutes of the second half, with three Cardinals limping off to the sideline, BNL had the definite manpower edge.

With the three-player advantage all but cementing the outcome, BNL coach Bret Roberts elected to remove players – rather than play with the extra attackers, which is allowed in the rules – to match Bloomfield’s short-handed plight. And that backfired as the Cardinals rallied in the closing minutes for a stunning 3-2 triumph on Thursday afternoon.

BNL, seeking its first victory since the regular-season finale in 2020, kicked out to a two-goal lead with a pair of gorgeous scores. But when the action was reduced to eight-on-eight, that opened creative space for Bloomfield’s Jacenyia Godoy, whose speed and attack were the difference in the final 15 minutes.

Roberts, recalling BNL’s similar situation last season, when the Stars had as few as eight available players for the bulk of the schedule, made the choice to compete on a level field.

“I wouldn’t feel right if we were playing eleven versus eight,” she said. “Yes, we probably would have won if we had kept all eleven on there. But you know how the season was last year, we played some games where it was that way and it was not fun. It was pretty brutal. And I didn’t want to do that to them.

“I don’t want to be that kind of coach. I don’t want to teach my players that’s what they should do in life. I want to be a good example. I hope they wouldn’t feel good about winning if we did that. I know it’s hard, as a coach, to kind of take that away from them. They could have won, but I didn’t want to win that way.”

When the field was full, BNL (0-5) was the better team. The first goal came from a great run by Lily Dusard, who took the ball deep into penalty box and drew Bloomfield goalie Jaeden Mietus away from the net. Dusard’s crossing pass found Sydney Hallatt in perfect stride in front of the unguarded goal, and Hallatt smacked home BNL’s first live-action score of the year with 26:19 left in the half.

“That’s the exact play we’ve been working on,” Roberts said. “I was really proud of them for seeing it on the field and putting together what we had been practicing. I knew we would be evenly matched with them, that we would have scoring opportunities. It looked beautiful.”

Dusard scored the second goal, taking an inbound pass and dribbling across the field to the right wing before rifling a shot past Mietus at 19:42.

The Cardinals (2-2) started to leak players in the second half. BNL (which tied Bloomfield last year) could have maintained a one-player advantage, or all three if that path was chosen. But with only seven players (plus the goalies) on the field, defending got tougher. There was room to maneuver.

Bloomfield’s first goal was struck by Adalyn Wiseman, who was awarded a free kick near the top of the penalty box and smacked a shot past BNL’s defensive line at 15:14. Then Godoy took over, winning a race to a long through ball for a shot at 12:11, then depositing the game winner at 5:45.

“We had every opportunity to win when it was evenly matched,” Roberts said. “We still could have won, and we didn’t. We still could have lost if we had kept an extra girl out there. We kind of fell apart at the end and we lost because of how we played, not because of having less girls on the field. We had some mistakes back there that they took advantage.”

The Stars will return to action at Columbus East on Tuesday.