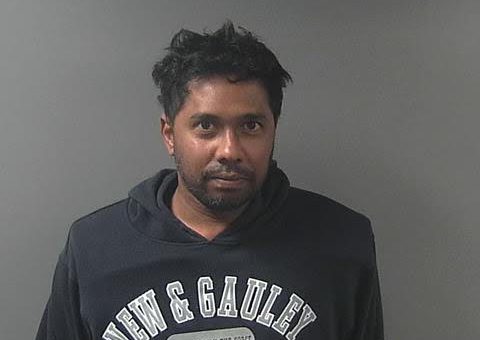 BLOOMINGTON – On Monday, August 29th at approximately 7:20 p.m., officers with the Bloomington Police Department responded to Target on East Third Street after a report of a bomb threat.

Upon arrival officers detained, a man matching the description of the suspect, located near the front of the store.

He was eventually identified as 41-year-old Rama Asuri, of Bloomington.

Officers assisted Target employees with evacuating the store, as multiple customers reported that the suspect had told them that there was a bomb inside his backpack.

Officers then began checking the business and located two unattended shopping carts containing backpacks inside the store. At that point, police say, the entire College Mall was evacuated to ensure the safety of all employees and visitors. Members from the Indiana State Police Explosive Ordnance Disposal (EOD) Team were requested and responded to Target to assist with the investigation. ISP EOD members determined that the two backpacks did not contain explosives and the scene was deemed safe at approximately 10:20 p.m.

Rama Asuri was transported to IU Health Bloomington Hospital, then to the Monroe County Jail where he was remanded to jail custody on felony charges of terroristic mischief and intimidation.