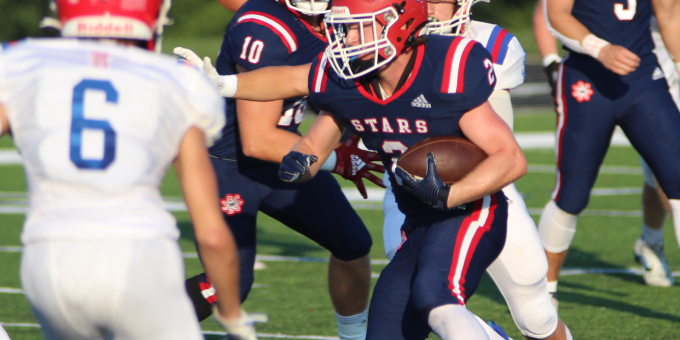 BEDFORD – The quarterback uniforms told the story. One was sweat stained, covered in those pesky, sticky rubber pellets from the artificial surface. The other was as pristine white as a wedding dress. Guess who won.

While Bedford North Lawrence’s Memphis Louden spent almost every snap in escape mode while evading a fierce, relentless outside pass rush, Martinsville thrower Tyler Adkins was cool and basically unbothered, accounting for three touchdowns as the No.17 Artesians conquered the Stars in the 2022 season opener at BNL Stadium.

Adkins fired two touchdown passes and ran for another, powering Martinsville to a 28-14 victory over late-starting BNL on Friday night. Martinsville running back Brayden Shrake powered for 103 yards, and the young Martinsville defensive front made Louden’s life one of misery and dread, chasing him to the ends of the turf and disrupting BNL’s attack. The Stars scored twice in the final five minutes, but that just obscured the reality of Martinsville’s dominance as the Artesians continued their mastery of the series.

That’s 20 wins in 23 games, including five straight since the renewal. The Stars, who haven’t emerged victorious against their northern nemesis since 1992, still can’t figure out what’s in that Artesian water. They had their chances, but two red-zone denials and the problems containing Martinsville’s furious swarm of linemen in the offensive backfield led to the first loss of the season.

Louden, give the guy credit, only got sacked once, just from sheer athleticism and dance moves. He just spent too much time dancing with the enemy in the collapsing pocket. He completed 18 of 30 passes for 189 yards, most of that coming after the Stars were in a 28-0 hole.

“They were pinning their ears back and coming hard,” BNL coach Derrick Barker said. “I don’t know that Memphis had a chance to get his foot in the ground on his drops. With a three-step drop, he had pressure. We have to make some strides there.”

Meanwhile, Adkins was kept clean and played efficiently. He zipped a 21-yard scoring strike to Trevor Hott late in the first quarter, hit Garrett Skaggs for a 34-yarder to start Martinsville’s final drive of the first half (which ended with Josh Jones’ 1-yard bull rush for a 14-0 lead), then directed two scoring drives in the fourth quarter as the Artesians pulled away.

“We were not our sharpest, but Tyler is pretty good when he’s on,” Martinsville coach Brian Dugger said. “We did pretty well. It seemed like we were on offense a lot.”

The Stars, with all the hype about their offensive strength, were frustrated during the first 40 minutes, limited to 18 total yards during their first five possessions while falling down by two touchdowns. They finally came to life late in the first half, with Louden finding Ryker Hughes for 27 yards to set up first-and-goal at the 4. Three players later, on fourth down from the two on the final play of the half, Barker elected to kick a short field goal rather than go for the touchdown. That decision backfired when the kick missed left.

“I wanted to take the points, with us getting the ball to start the second half,” Barker said. “We had a good drive going and I wanted to get something out of it. Much like last year, once we got inside the 20, we couldn’t score. We have to find something to get the ball in the end zone in the red zone.”

That came into play in the third quarter, when BNL got inside the 20 again and came up empty. Martinsville responded with a soul-crushing, 81-yard march, capped by Adkins’ 3-yard pass to Hunter Stroud for a 21-0 advantage. On the next series, Adkins scored from two yards out for the 28-0 lead.

“It seemed a lot of the scoring plays were on third down,” Barker said, and he was correct. All of them were. “We were just one play away from making the stop. We played really hard on defense, definitely saw some good things.”

BNL’s final flurry was a 31-yard scamper by Louden (on fourth down) for the first score with 4:52 left. He rifled a beautiful 29-yard touchdown to Colten Leach to make it 28-14 with 2:15 left, and the Stars recovered the following onside kick. But any brief thoughts of a miracle rally were snuffed when Louden’s last pass bounced off a receiver’s hands and was picked off by Martinsville’s Quentin Bland with 47 seconds remaining.

“Things got ugly, and I knew we would be mentally tough enough to respond,” Barker said. “The kids kept battling. It’s not a heart issue or an effort issue. We just have to clean up mistakes.”

In addition to his passing numbers, Louden was the leading rusher (out of necessity rather than design) with 68 yards. Leach, after missing the last two seasons with knee surgeries, caught six passes for 101 yards, and Dylan Nikirk was a whirling highlight with kick return yards. But the Artesians had the defensive answers, usually with excess heat from the perimeter.

“We thought our defensive ends would have a good night,” Dugger said. “Credit Louden for getting out of the pocket and not going down a lot. He made some plays out in space, but we were able to get him off the spot.

“Our defense was outstanding. They played unbelievable. We’re so young on defense, I’m really proud how they played.”

BNL will return to action next week, hosting Bloomington North.