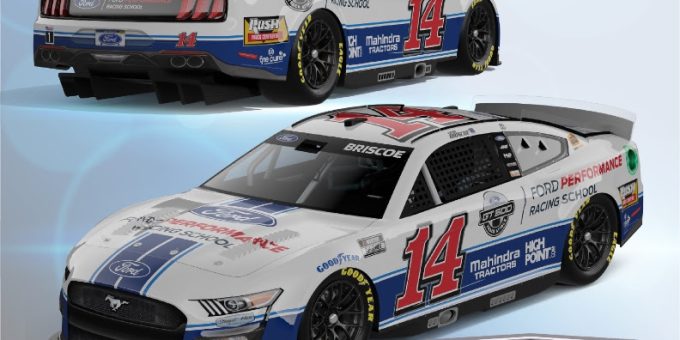 WATKINS GLEN – Chase Briscoe and the No. 14 Ford Performance Racing School team for Stewart-Haas Racing (SHR) are set to compete in the fifth of six road course events of the 2022 season this Sunday at Watkins Glen (N.Y.) International.

This year’s Go Bowling at the Glen marks Briscoe’s second NASCAR Cup Series start on the seven-turn, 2.45-mile circuit. In 2021, he started 27th and finished ninth.

In his lone Xfinity Series start at Watkins Glen in 2019, Briscoe started and finished sixth.

“Watkins Glen is not as technical as some of the others,” said Chase Briscoe. “You have to focus a lot on the balance of the car to be able to get around it. It’s a very high-speed track and there isn’t really a slow corner that you can use to set up a pass if you get behind. We’ve seen with the new car it’s been tough to pass, and guys have been really aggressive on the road courses, so I think we’ll for sure see some guys making moves that might not work.”

The 27-year-old racer from Mitchell, Indiana, has picked up two Xfinity Series wins on road courses. His first career Xfinity Series victory was in the series’ inaugural race on the Charlotte (N.C.) Motor Speedway Roval in 2018. He also fulfilled his childhood dream of kissing the historic Yard of Bricks when he scored his fifth win of the 2020 season on the Indianapolis Motor Speedway road course.

There are two races left in the regular season and Briscoe is getting closer to being locked into the playoffs but is he comfortable in the standings?

“I guess,” he added. “It’s tough because we had a decent run at Michigan. It didn’t really hurt us in points and we came out feeling like we were going to be OK. Then at Richmond, we were running top-five for a little while in the top-10, and then the car caught on fire. That was really disappointing because we’ve been so strong on the short tracks and I felt like it was where we could put ourselves in a good place for the last two races. I still think we’re OK, but it really comes down to when Kurt (Busch) comes back and how these next two races go.”

Briscoe finished among the top 10 in all but three of the 10 road-course races in which he competed in the Xfinity Series. And in his lone NASCAR Camping World Truck Series start on a road course – the 2017 race at Canadian Tire Motorsports Park in Bowmanville, Ontario – Briscoe finished seventh in a Ford F-150.

This weekend’s race is the next-to-last event of the regular season. This year’s 16-driver playoff field will be set after the regular-season finale Aug. 27 at Daytona (Fla.) International Speedway. Briscoe sits 17th in the driver standings but is currently poised to make the Cup Series playoffs for the first time by virtue of his March 13 victory at Phoenix Raceway, provided there are no new first-time winners for this season at Watkins Glen or Daytona.