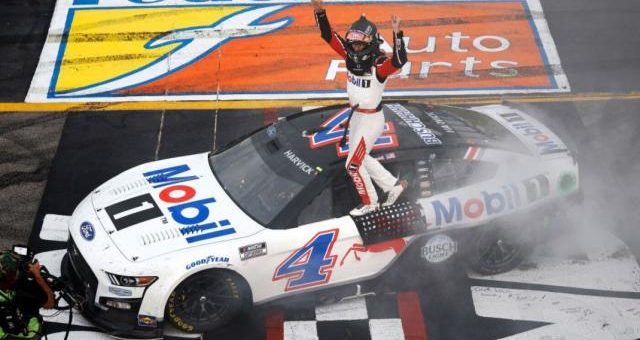 His margin over second-place Christopher Bell was .441 of a second.

Harvick took the lead from Logano with 66 laps remaining in the race. Logano led more than 200 laps in the race before he relinquished the lead to Harvick.

“It’s like I said last week, the cars have been running good week in and week out and you see that we have a lot better understanding of what’s going on with how we adjusted on the car after the first run and were able to get our car handling a lot better,” said Kevin Harvick, driver of the No. 4 Mobil 1 Ford Mustang. “I think as it got dark, the racetrack really came to our Mobil 1 Ford Mustang. We’re just going to keep doing the things that we’re doing. I think we just have to keep an open mind about things and keep progressing and keep understanding the car, understanding what we could have done better today, understanding what we could have done better in qualifying yesterday, and doing the same thing over and over. You know, it’s not really fair to just look at results, because at the beginning of the year we didn’t fire off as good as we thought. We didn’t have the improvement. It took us a few months, but we’ve had three or maybe four months now of really solid runs, really good speed, ever since Dover really, that we’ve been really close. We’ve had some bad luck, had some mistakes that I’ve got to clean up. We’ve made progress through all of it. The results don’t always show it. We were running really well at the 600 and we ended up upside down. There’s no doubt in my mind we could’ve competed for a win at the Indy road course and we were on fire. We’re making highlight reels for all the wrong reasons. We’ve been fast in those processes, though. We just have to put it all together to show those results like we did here today. Just got to thank Mobil 1, Busch Light, GEARWRENCH, Hunt Brothers Pizza, Rheem, Ford, Xfinity, Morton Buildings, E-Z-Go, everybody who helps Stewart-Haas on this 4 car.”

For Harvick, it was the 60th win of his career. It was the fourth time he won at Richmond and the first time in the 0.75-mile oval since 2013.

There were five caution periods for a total of 28 laps. Only 11 of the 36 drivers in the Federated Auto Parts 400 finished on the lead lap.

Chase Elliott remains the championship leader after Richmond with a 116-point advantage over second-place Ryan Blaney.

Harvick has now won 25 NASCAR Cup Series races with Ford. He is one of only 13 drivers to win 20 or more races with the manufacturer. He stands 10th on Ford’s all-time win list and is now only one win away from tying Brad Keselowski, Junior Johnson, and Fred Lorenzen for ninth.

Harvick has won more races driving a Mustang (15) than any other driver since the iconic muscle car became Ford’s flagship model in 2019. This was Ford’s 717th all-time NASCAR Cup Series victory, its sixth of the season and its second straight. Harvick won last Sunday at Michigan International Speedway in Brooklyn.

This was Ford’s 34th all-time NASCAR Cup Series win at Richmond. It won its first race at the track on May 5, 1957, with Paul Goldsmith.

This was Harvick’s 37th NASCAR Cup Series victory since joining SHR in 2014.

“When the clouds came and the track cooled, we kind of lost it. The first couple of runs of the race we were so fast. We drove from 32nd up to the top-five,” said Aric Almirola, driver of the No. 10 Smithfield Ford. “Our Smithfield Ford Mustang was really good in the long run. We took care of the tires really well and it did everything I needed it to do. As the pace picked up and the track cooled off, I just couldn’t get the car to rotate as I needed it to and just couldn’t quite carry the speed those other cars could. It was a good day. We’ve had a rough month, so to come here and rebound and have a good run – we need a win, but to have a good run is a confidence booster.”

Harvick’s victory in the Federated Auto Parts 400 marked the 95th overall win for SHR. It was the organization’s 69th points-paying NASCAR Cup Series victory, its third of the season and its second at Richmond.

This was Harvick’s third straight top-10 at Richmond. He finished eighth in this race last year and second in the series’ prior visit to the track in April.●  Since joining SHR in 2014, Harvick has only one finish outside the top-15 at Richmond.

Harvick’s 29 top-10s at Richmond are the most among active NASCAR Cup Series drivers.●  Harvick finished fourth in Stage 2 to earn seven bonus points.

Harvick led twice for 55 laps, increasing his laps led total at Richmond to 1,235.

Almirola earned his seventh top-10 of the season and his eighth top-10 in 21 career NASCAR Cup Series starts at Richmond. Almirola finished sixth in Stage 2 to earn five bonus points.

The next event on the NASCAR Cup Series schedule is the Go Bowling! At The Glen on Sunday, Aug. 21 at Watkins Glen (N.Y.) International. The 90-lap race around the 2.45-mile, seven-turn road course begins at 3 p.m. EDT with live coverage provided by USA and SiriusXM NASCAR Radio.