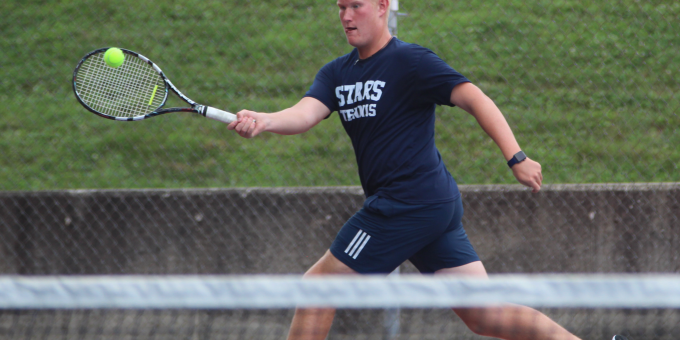 BEDFORD – Sometimes that first step can be a long one.

Bedford North Lawrence’s season debut didn’t go as planned, with Barr-Reeve playing the spoiler on the asphalt courts. The Vikings swept the doubles while pounding out a dominating 4-1 road victory on Monday afternoon.

The Stars salvaged one court as Jayden Kemp posted a win at No.3 singles. Barr-Reeve dropped only 10 games in the other four matches. BNL coach Chris Kurtz juggled his lineup following last week’s preseason scrimmage, but the changes didn’t alter this outcome.

“It isn’t the start to the season that we were hoping for, obviously,” Kurtz said. “But it was a really good test, and helped us identify some things that we need work. Barr-Reeve was really athletic, and resilient, and we just got outplayed tonight.

“As a team, I felt like the effort was there but the shot making was not. Too many errors and free points. We have to eliminate those to contend with good teams.”

Kemp made the move from doubles to singles with success as he outlasted Levi Lester 6-1, 2-6, 10-6 (in a super tiebreaker to decide the third set).

The Vikings were too tough elsewhere. Donnie Miller topped Graham Turner 6-3, 6-0 at No.1 singles while Xavier Meiring conquered Nate Pemberton 6-2, 6-2 at No.2.

In doubles, Barr-Reeve‘s Ethan Stoll and Isaac Madison smacked Gavin Baker and Isaac Bridges 6-0, 6-0 at No.1, while Brody Swartzentruber and Kyle Graber decked Carter Kimmel and Drew Stephenson 6-3, 6-0 at No.2.

“Late last week we did make a change to what I thought was going to be the lineup,” Kurtz said. “We moved Nate and Jayden from doubles to singles, and Gavin and Isaac from singles to doubles. All four of those players are growing into new roles and styles of play, but in the end I think this gives us the best chance to win as a team, and that’s what we’re all about. We expect some growing pains, but these guys are tough and will make it work.

“We’ve got to stay mentally strong when things don’t go well early. It’s a full week of matches for us, so we’ll get back at it and work hard tomorrow.”