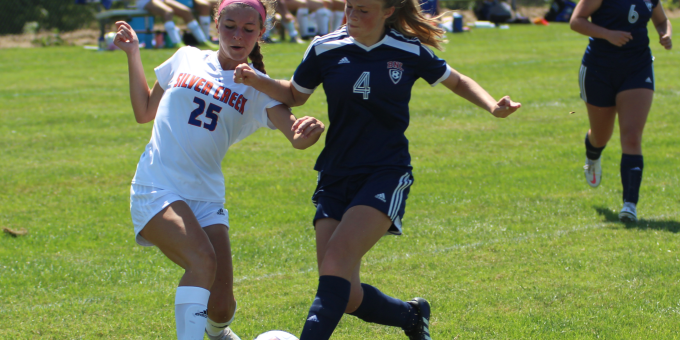 BEDFORD – Bedford North Lawrence, in the tentative first step of the rebuilding process, had to start somewhere. Silver Creek shed some light on just how much ground that step needs to cover.

The Dragons scored seven goals in the final 28 minutes of the first half and rolled to a 9-0, mercy-rule triumph over the inexperienced Stars in the 2022 season opener on Saturday. Carley Troutman recorded a hat trick for Silver Creek (1-0), which ended the contest at the 20-minute mark of the second half.

After a slow start, the Dragons turned smoke into fire with an offensive burst. Troutman logged all three of her goals and Reese Turner scored twice to vanquish BNL, which fielded a full team but had only three players with any previous experience. They had to learn on the fly, and that’s the hard way.

”Silver Creek is a very good team to start out with, when only three of our girls had ever played a soccer game in their lives,” first-year BNL coach Bret Roberts said. “So it was a tough team to play for the first game.”

“Our kids played a little slow out of the box, but we finally found our rhythm and pieced together some stuff,” Silver Creek coach Brett McLaughlin said. ”BNL was a little more aggressive than I thought they would be. They played really well, the keeper did a great job and had some legitimate nice saves.”

BNL freshman Rose Dusard was forced into emergency action in goal for the first half. Expected starting goalie Maya Fahr, battling an illness that kept her temporarily sidelined, came on in the second half.

“There’s obviously a ton of things to improve on,” Roberts said. “I saw some positives. Rose did an excellent job, I know she was nervous but she really stepped up. We’ve got to work on girls knowing their positions. We were moving people around and they playing playing in new spots.”

The Stars will visit Bloomington North on Monday.