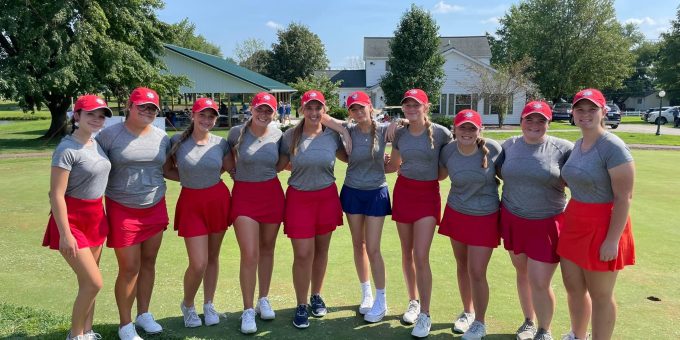 WASHINGTON – Chloe McFaddin fired a fabulous 2-under 34 on the front nine at Country Oaks while leading Bedford North Lawrence to wins over Barr-Reeve and Washington during girls high school golf action on Thursday.

The Stars, with McFaddin posting three birdies, carded a team total of 166. The Vikings finished with 180 while the Hatchets tallied 219.

McFaddin’s career-best nine-hole tour featured birdies on the first, fourth and sixth holes. Her only bogey, courtesy of a bad tee shot, came on the seventh. BNL did not arrive in time to hit warm-up shots on the range, but that didn’t faze her.

“I was a little worried at first, all we got to do was putt,” McFaddin said. “But I hit the first ball pretty well, birdied the first hole, then tried to stay confident through the round. My driver was pretty consistent, I was sticking the approach shots next to the pin all day, and I had no three-putts. Everything was just working.”

“Chloe played very well today,” BNL coach Kori Johnston said. “She eliminated the three-putts and now sees what she can do. I’m really proud of how she’s played so far this season.”

Kinleigh Root, Ellie Horton and Nora Howat all finished with 44s to cap the BNL scoring.

“The other four aren’t far off from shooting what they’re capable of,” Johnston said. “We need to eliminate the one or two bad holes, and do a little more work around the greens at practice, and they’ll be shooting low like I know they can.”

BNL will play in the Columbus East Invitational on Saturday.