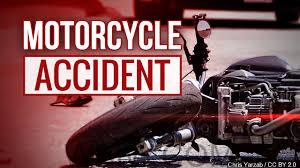 AVOCA – A Bedford teen was injured after his motorcycle collided with a deer on Avoca Eureka Road on Tuesday night.

The driver Cayden Thomas, 17, of Bedford, was not on the scene when the officer arrived at 7:05 p.m. . The officer noted in his report that there were marks where the motorcycle slid across the road and fur from the deer on the roadway.

The driver’s uncle arrived on the scene sometime later.

The uncle allowed the officer to speak to Thomas via cell phone who told the officer a deer had run across the roadway and struck the front end of his motorcycle.

The uncle told the officer he moved the 2002 Honda motorcycle to his home which was nearby.

Thomas was being transported to IU Bloomington Hospital for treatment of his injuries which include a possible fracture or dislocation to his left ankle and left foot, a possible concussion, and scrapes all over his body.

Thomas said the deer struck him in the head.