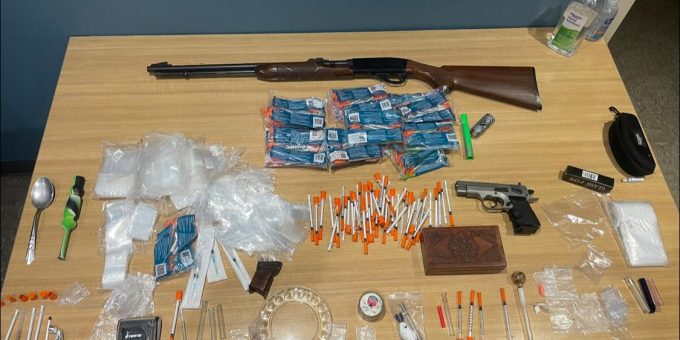 BEDFORD – A Bedford man was arrested this morning after a Mitchell Police officer responded to the 110 block of East Grissom Avenue in an attempt to locate 34-year-old Eric King who was wanted on two active felony warrants.

Police responded to the home after receiving a report King was at the home.

Upon arrival, the officer parked two houses down the street with the police vehicle’s lights off and approached the home.

While standing on the sidewalk in front of the home, the officer saw a person walking in the dark on the west side of the home. As the person approached within roughly 20 feet of the officer, they recognized the male. He asked the man what he was doing and he said he was there to visit a friend.

The officer then heard talking from inside the home. Through the window, the officer saw another male and a  female 37-year-old Nikki Gammon smoking a meth pipe.

Gammon answered the door. The officer spoke to the other male and learned King could be inside and was given permission to enter the home. Officers found Eric King asleep in a back bedroom.

Next to King was a hypodermic syringe that upon field testing, tested positive for the presence of meth.

The officer then spoke to Gammon who admitted to smoking meth.

She told the officer the pipe was in her purse.

Assisting at the scene was a Lawrence County Sheriff’s Department deputy.

Officers then applied for a search warrant for the home and Judge Bob Cline granted that warrant.

During a search of the home, officers found multiple hypodermic syringes that tested positive for meth, multiple syringe caps, and a plastic corner cut baggie containing meth residue. In a bedroom, officers found a large quantity of new and used small plastic baggies and a cyclobenzaprine hydrochloride pill which is available by prescription only. Also located in a small plastic baggie was one broken white color pill with no markings. Police found marijuana, a digital scale, a .45 cal EAA pistol, a .22 Remington rifle, a baggie containing crystal meth and multiple broken glass tubular smoking devices containing meth residue.