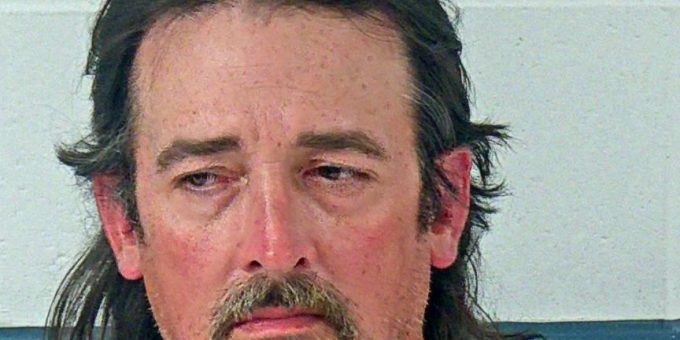 BEDFORD – An Edinburg man was arrested after police began an investigation on April 22, 2022, in regards to a theft that occurred at Walmart.

On that day a Walmart Asset Protection Associate received a text message at home from a Front End Team Lead employee. That employee said she had just received a tip from a customer regarding a possible theft. The customer stated a male, with a dark shirt, blue jeans, and scraggly hair had exited the store around 10:30 p.m. with a cart of merchandise that he did not pay for.

Upon arriving at the store police immediately launched an investigation into what had occurred.

The officer determined on April 21, 2022, an unknown male parked his vehicle outside the grocery entrance. He then entered the store at 10:08 p.m.. The male spent several minutes in the vestibule at the EcoATM, the machine that accepts cell phones for cash. The officer was unable to determine if he actually used the machine or not.

Once finished with his selections, the male walked straight out the grocery exit, passing all final points of sale at 10:30 p.m., making no effort to pay for the selected merchandise.

The known theft amount, in this case, of the identified items is valued at $58.31, pre-tax.

The officer was able to review the suspect’s photos and store video of the unknown male, and it appeared that he had attempted to use the EcoATM kiosk between 10:08 p.m. and 10:16 p.m.

The officer checked the EcoATM transactions using the LeadsOnline website login and found a ticket timestamped at 10:08 p.m. Along with this ticket, several photos were attached of the male during the transaction. The ticket was an Indiana driver’s license for 44-year-old Drew Lynn Pile, of Edinburgh.

The officer recognized the name Drew Pile from police radio traffic earlier in the day when another Bedford Police officer conducted a traffic stop with the male on April 22, 2022, at 10:10 a.m.

The investigating officer reviewed the video from the traffic stop, which shows Drew Pile driving a silver Oldsmobile Alero that matches the one in the Walmart photos.

In the video, Pile states that he is test driving the car and that it actually belongs to his neighbor. Drew states that he has been staying at 2616 U Street.

On April 27, 2022, the investigating officer went to 2616 U St attempting to speak with Pile. The silver car was not present at the time. The officer made contact with the resident at this address, who advised that Pile was not there and that he lives in Edinburgh. He also stated that Pile does not have a working phone number at this time.

The information was forwarded to the Lawrence County Prosecutor’s Office and a warrant was issued for Pile’s arrest on a charge of theft, a Level 6 felony.