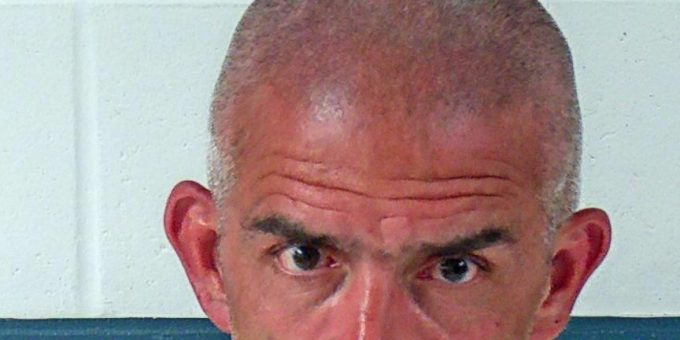 MITCHELL – A Mitchell man was arrested on Friday when Mitchell Police Department officers were called to a home at 10:53 p.m. at 512 West Frank Street after a report of a domestic fight in progress.

As officers were en route they were told the two parties involved were now separated.

When the officers arrived they knocked on the door,  and spoke to a female who was “very upset and had been crying”.

The woman told the officers, that she had been away for three days seeing her son who is in the military and had just got home. She said she and 53-year-old Mark Nowark got into an argument about Nowark not paying the phone bill. The woman said Nowark had also been drinking alcohol.

The woman told officers Nowark had smacked her in the arm and back of her head and had smacked the phone out of her hand when she was calling 911. She told police, Nowark grabbed her wrists leaving a bruise.

When police spoke to Nowark, he was “agitated and very standoffish”. Officers could smell the strong odor of an alcoholic beverage emitting from Nowark.

An officer attempted to detain Nowark, but he walked away into the kitchen. The officer followed and again asked him to place his hands behind his back. Nowark complied and he was arrested on a charge of domestic battery.

Nowark told police, “Nothing (happened),  I was just trying to make food and go to sleep”.

The woman filed a battery affidavit against Nowark, saying  “this has to stop”.

When the officer returned to his police vehicle, Nowark was screaming and throwing his body back and forth.  He was told to stop or he would be charged with disorderly conduct.

The office then had the woman call the Hoosier Hills PACT crisis hotline.