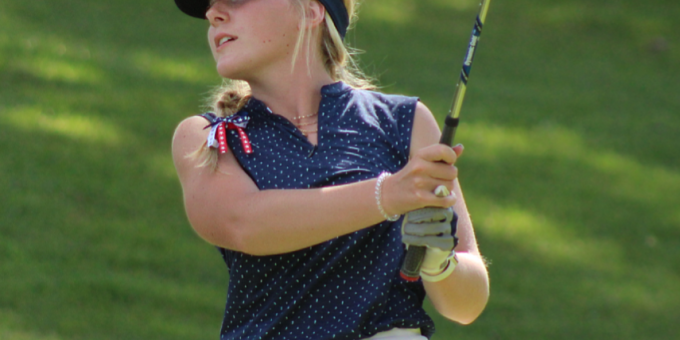 BEDFORD – The rules of golf allow 14 clubs in the bag. That enough weight to lug around for 18 holes. Bedford North Lawrence is going to add an extra weapon to the arsenal as the Stars carry the burden of expectations into a promising 2022 campaign.

The Stars, starting Kori Johnston’s second season in charge of the program, are adding a shot of confidence to the usual collection of drivers, iron and putters. If they know how to use the others – and there’s ample evidence they should – then mastering the additional and important equipment should come easily.

With three key returning starters and a talented freshman poised to crack the five-player lineup, BNL is preparing for a major move. The Stars will chase a 10th consecutive IHSAA sectional title when the postseason begins, but they will be eyeing a state finals ticket. And they should. BNL has been there eight times, the last in 2018.

“Confidence is the big thing. You can do it on the range and practice green all day long, but if you don’t believe in it, you can’t take it to the course.”

Optimism starts with veterans Chloe McFaddin, Kenley Craig and Ellie Horton, who were usually the top scorers last season. Nora Howat will be the lone senior, and Kinleigh Root is expected to make a big splash in her rookie campaign.

“We have a really solid four that have put in the work this summer, so it’s really the fifth spot that’s up for grabs,” Johnston said. “Like last year, I expect a lot of shifting in the lineup.”

That fivesome will be in the spotlight when the regular season begins on Monday, although that could change at any time. Golfers earn their playing time based on something simple – scores. The fastest way to work on those is the short game, which has been a point of emphasis for most of the roster this summer.

“We have a pretty solid starting lineup, so I expect good scores from all of us,” McFaddin said.

The sectional streak is impressive, and each title takes BNL closer to the state record of 14 straight (Twin Lakes, 1998-2011). It’s become a source of program pride, just from all the work from previous generations.

“Keeping the streak alive, after so many years, adds more pressure,” McFaddin said. “If it were only a couple of years, it wouldn’t be as bad. But nine is a lot.”

That goal looms later in September. Right now the first challenge is improvement and posting the expected quality numbers. BNL needs leaders to card low scores on a consistent basis and the supporting cast to solidify.

“We’ve all played together, we’re getting used to it and trying to figure it all out,” Craig said. “You have to put the work into it, you have to have an open mind. You have to let the bad shots go and just play your game. I’m definitely going to stay more positive. My mental game is what kills me the most. I’m down on myself, I have to work on staying up.”

BNL will compete in the Bloomington South Invitational at Bloomington Country Club on Monday morning.