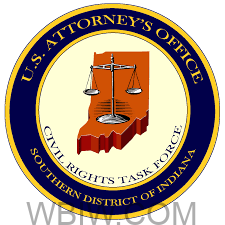 WASHINGTON – Matthew V. Palmer-Coy, 26, of Washington, was sentenced late Tuesday to 46 months in federal prison after pleading guilty to possession of a firearm and ammunition by a prohibited person and possession with intent to distribute methamphetamine.

According to court documents, on May 23, 2021, a Washington Police Officer stopped Palmer-Coy in the vehicle he was driving after observing a traffic violation. A K-9 officer alerted to the presence of illegal narcotics in the car and officers searched the vehicle. During the search, officers found a lockbox containing a firearm with an altered serial number, individually wrapped baggies of methamphetamine, clear glass pipes, unused plastic baggies, a digital scale, ammunition, and a notebook that appeared to be a drug ledger. Palmer-Coy knew he was unauthorized to possess firearms or ammunition as he was previously convicted of felony charges of neglect and possession of methamphetamine in Daviess County.

Zachary A. Myers, U.S. Attorney for the Southern District of Indiana, and Daryl S. McCormick, Special Agent in Charge of the Bureau of Alcohol, Tobacco, Firearms, and Explosives (ATF), Columbus Field Division, made the announcement.

ATF investigated the case. The Washington Police Department also provided valuable assistance. The sentence was imposed by U.S. District Court Judge Richard L. Young. As part of the sentence, Judge Young ordered that Palmer-Coy be supervised by the U.S. Probation Office for three years following his release from federal prison.