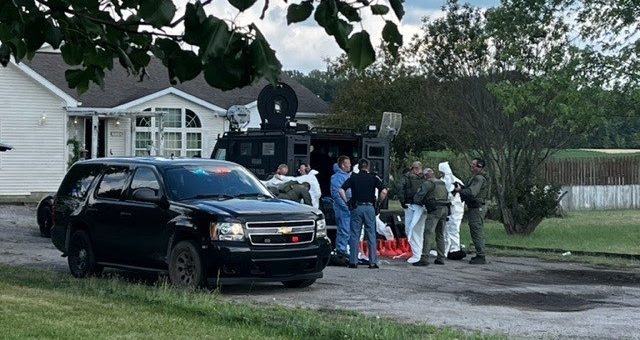 The clerk at the gas station informed the officer that a male entered the store and ran out with a home entertainment system.  The clerk was able to provide a detailed description of the man and the vehicle plate number.  Officers checked the registration provided, and they went to the listed residence, 9100 S. County Road 750 W. (Delaware County).

When officers arrived at the residence, they located a vehicle matching the description and a female standing outside. When the female saw the police, she ran into the residence and closed the door.  Officers attempted to make contact with her and were unsuccessful. Chesterfield Police Department requested a search warrant out of Madison County for the residence and contacted the Indiana State Police for assistance.

Indiana State Police activated the SWAT (Special Weapons and  Tactics) Team and a Hostage Crisis Negotiator to respond to the scene.  After the search warrant was issued, the SWAT Team attempted to call out the individuals from the residence.  Three females and a small child exited and were taken to a safe location.  Further investigation determined that three males remained in the residence, possibly armed. The Indiana State Police negotiator continued further attempts to de-escalate the situation, which was successful when the remaining individuals voluntarily exited and were taken into custody.

While the remaining suspects were exiting, one of the males had an unrelated medical emergency. Troopers immediately secured the individual in a safe location and provided life-saving medical assistance to the man.  He was transported to IU Health Ball Memorial Hospital by ambulance.