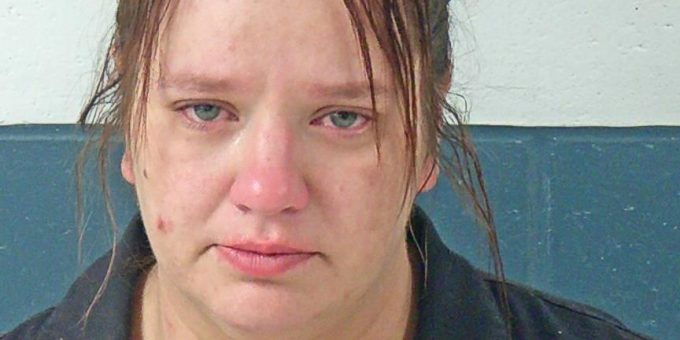 MITCHELL – An Orleans woman was arrested on Friday at 6:52 p.m. when a Mitchell Police officer responded to Spring Mill Inn after a report an employee found drugs in a woman’s employee bathroom.

When police arrived they were escorted to the bathroom where an officer found the drugs in the far back corner of the room underneath a wooden table. The drugs were wrapped in aluminum foil. In the foil, the officers found a red straw with meth residue and meth residue under the straw.

Another employee told police that 34-year-old Ashley Stiles had offered her meth.

The officer then asked when the last time the bathroom had been cleaned. It was cleaned at 10:00 a.m. and Stiles arrived at work at 2:32 p.m. that day.

The employees told police they believed Stiles was now under the influence of the drug.

The officer then spoke to Stiles and showed her the items found in the bathroom. This made Stiles nervous and would not look at the officer questioning her. She told the police “I have no idea” where the items came from.

When asked if she offered meth to another employee she said, “no I would not ever do that”.

The officer then asked when Stiles had last used meth and she said she did not use drugs and said, “ok honestly I smoke marijuana and that is it’.

The officer then asked to search Stiles’ purse and backpack which she consented.

In the backpack in a money purse, the officers found a small plastic baggie with a white powdery crystal-like substance that later tested positive for meth.

Stiles was then arrested on charges of possession of meth and drug paraphernalia. She then admitted to having drugs in her shoe. In her shoe police found a baggie containing crystal meth.

Stiles told the officer, “its mine, it’s all mine”. She then admitted to smoking meth on Thursday, frequently smokes the drug and the drugs found in the bathroom belonged to her.