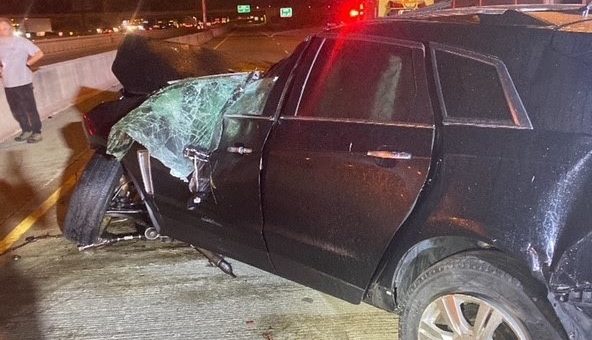 LAKE CO. – This morning at approximately 2:22 a.m., troopers responded to a crash involving serious injuries on I-80/94 WB at the 1.2-mile marker. This location is just east of Calumet Avenue.

A preliminary investigation by Trooper Luckey revealed that a 2014 Cadillac SUV attempted to improperly pass on the right and merge in front of a semi as it was entering a restricted lane. The Cadillac struck an attenuator head-on before going airborne and hitting the semi as it passed.

The driver of the vehicle, a 25-year-old Illinois woman, was ejected while a front passenger was trapped inside the vehicle. Two other rear passengers were able to exit the vehicle.

The injured parties were transported to Munster Community Hospital and later transferred to the University of Chicago Hospital for treatment of potentially life-threatening injuries.

The driver of the semi was not injured.

The roadway was blocked for approximately four hours for crash cleanup and investigation.

Alcohol and/or drugs are suspected to be contributing factors in this crash. Once the investigation is complete, the findings will be turned over to the Lake County Prosecutor’s Office for consideration of charges.

Assisting at the scene were the Hammond Fire Department, Superior EMS, and Bert’s Towing.