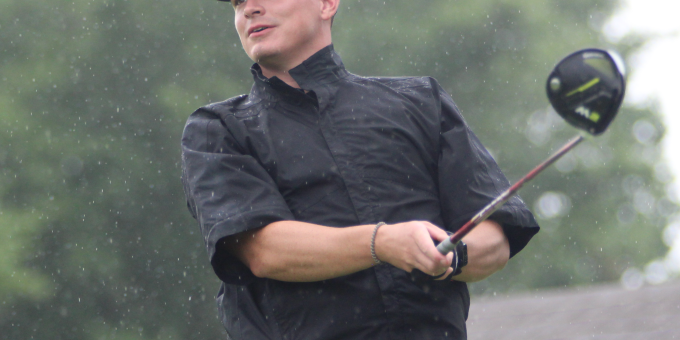 BEDFORD – Trey Turner was singin’ in the rain. What a glorious feeling, he’s the champion again.

By all accounts, including his own self-critique, Turner can’t carry a tune. Not a note. Crooning is not in his repertoire. But his golf swing was in perfect harmony, and his clubs made sweet music during a final-round performance that was worthy of a standing ovation. He’ll settle for the respectful golf clap and another Bedford Men’s City Tournament championship. How’s that sound?

Ignoring the constant and annoying precipitation, keeping his grips and his wits dry, Turner carded a remarkable 5-under 67 on a soggy, soaked Sunday to complete his second straight City title and third overall. He joined prestigious company as a three-time winner, an elite list that includes some of the Otis Park legends, and blasted to a 10-shot margin of victory over proverbial tournament bridesmaid Jansen Perdue, whose sizzling 70 on the final day got overshadowed by Turner the Terrific.

A final-round washout, with thunderstorms and an inch of rain predicted, was feared, and indeed that transpired. Turner took care of that, washing away the competition with five consecutive birdies on the front nine. He hit only one sour note all day – that dastardly eighth hole, where so many rounds go to die – and completed 72 holes at 7-under 281. That’s after opening with a waterlogged 76 during the stormy first round, a fact that makes his sensational closing round even more exceptional. Award him a Grammy for that.

Rather than a gold statute, he’ll accept that limestone block that now goes to the champion. Three-time champion has a ring to it.

“It’s awesome to put my name up with those guys,” Turner said. “It’s really cool. There have been some great players, like Aaron (Harrell) and the Gratzers. It’s awesome to do that. It’s not easy.“

Oh, he made it look easy. The rain descended and the floods threatened, they beat upon the defending champion, but Turner kept his head above water while diving into red numbers. Five straight birdies (starting on the third hole) and seven total on his drenched scorecard. Only one glitch, a darn double-bogey on the eighth. And a rain-ruined hat that got discarded late in the day.

Fourth hole, wedge to 10 feet. Fifth hole, a simple two-putt from 25 feet after a mammoth drive over the hill. Sixth hole, after a blocked tee shot and recovery, a wedge to 10 feet. Seventh hole, 330-yard wallop off the tee and short pitch to six feet. Five for five.

“On the third hole, I wasn’t even trying to go at that pin, tugged it and hit one pretty close,” Turner said. “That kind of kick-started the round. It was good to get going that way.”

The eighth was a series of unfortunate events. His drive right, smartly away from the boundary wall for safety, ended up in a bad lie after a drop from a cart path. His first punch to escape the trees got gobbled up by wet grass. His next punch was short of the green. He cleaned up that mess, then responded like a true champion with a wedge to four feet for birdie on 9 and a front-side 33.

The back nine was an exercise in mental toughness. Only one birdie, on the downhill 16th as his wedge approach – headed directly for the flag and a possible eagle – glanced off playing partner Koby Robb’s ball and stopped four feet from the cup. Everything else was systematic. Stay in the moment, keep the pre-shot routine intact, execute.

“It was getting into a groove, getting into a rhythm,” Turner said. “You have to stick with that in golf. That’s so important, and it’s difficult when the grips are wet. I was proud of myself to keep that up the whole way.

“I was impressed with the way I played, especially having the lead (by six shots heading into the final round) and having to defend that. There are a ton of great golfers that play in this tournament. You have to keep those guys from taking your title. It’s tough because they can shoot low scores on this golf course.”

One of those is Perdue, who was a member of the final group for the seventh time. His round included birdies on the first, fifth and 16th and 17th holes. He pointed back to the third round, a 73 that featured a lot of scrambling, as his ultimate demise.

“When you grind around and make a bunch of pars, you’re going to finish second or third in this thing when you do that,” Perdue said. “You have to be able to go low and hit it well. I kept myself in it but didn’t hit it well enough to win. Got beat by a better player.

“Trey just put it away, This was reminiscent of two years ago, when I shot 70 in the final round and Aaron shot 65. Trey made five birdies in a row, the guy played great.”