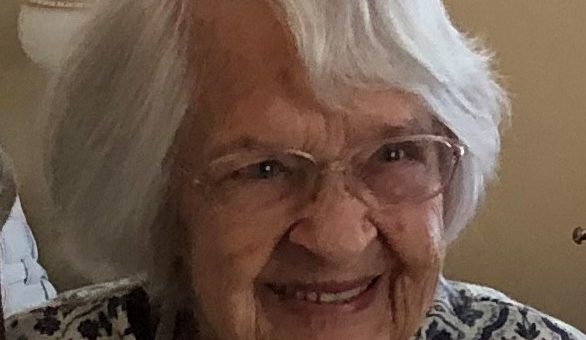 Mary Mathews, Grandma-Great to those who loved her best, went home to her lord, on June 22, 2022.

She was 96. Mary was the daughter of Sylvia and Herbert Eilert. She was the proud graduate of Arsenal Technical High School in Indianapolis, Indiana. Vernon Mathews was the love of Mary’s life. She was married to him for 56 years but loved him for 76 years. They are together again in paradise.

A Hoosier by birth, she lived in Indianapolis from 1946-1981. Mary moved with Vernon to New Smyrna Beach, Florida in 1982. In 2003 she moved to Mint Hill, North Carolina, and finally settled in Monroe, North Carolina. Mary and Vernon traveled the world, and she is prominently featured, much to her chagrin, in amazing slides from some of the world’s most famous landmarks.

Mary was a domestic goddess. She was an amazing cook, well known for her fried seafood, cookies, and candies. She was a party host extraordinaire, and the maker of Christmas crafts for everyone. She was the second in command of the USS Never Sailed, a proud part-time shrimping boat. She would always be found tied by a rope to the captain, Vern Mathews, the only one in the boat that could swim.

Like every good Hoosier, in March, she could be found watching basketball. Mary was baptized into the Baptist church, in the river near the Mathews’ family homestead, in Buddha, Indiana. She was a doer and nothing was too hard for her. She was always involved with the nursery and children’s church. Her mission was to lead the little ones to Jesus. She dedicated her life to service and was sure and certain of the rapture to come.

A graveside service will be held at 1:00 p.m. on Thursday, June 30, 2022, at the White River Baptist Church in Bedford. In lieu of flowers, Mary’s family requests donations be made to Servants Quarters Fellowship. A church dear to Mary’s heart. The address is 1429 Sabal Palm Drive, Edgewater, Florida 32132. Local arrangements are by the Ferguson-Lee Chapel of Thorne-George Family Funeral Homes in Bedford.