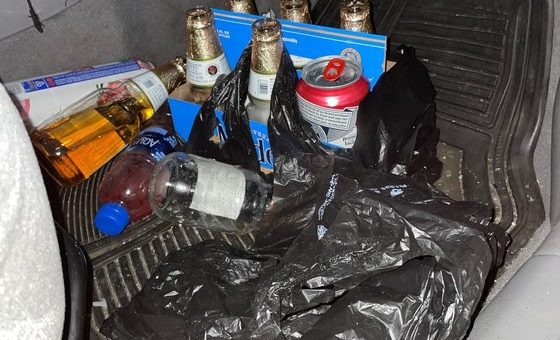 SPEEDWAY – An Indiana State Trooper is in the hospital with serious injuries after being struck by an alleged drunk driver near the 2700 block of High School Road.

An Indianapolis Metropolitan Police Officer was also injured in the crash. This morning, at 3:26 a.m., Trooper Keith Martin stopped to assist Speedway Police Officers and IMPD Officers who were along High School Road with a semi-truck that was on fire.

While on the scene, standing beside his vehicle with emergency lights activated, Trooper Martin was struck by a silver Toyota Corolla. The driver of the Toyota then fled the scene in the vehicle. An IMPD Officer also received injuries as a result of the collision, that officer was treated and released at the scene. Trooper Martin was taken to a local hospital by ambulance, he has serious injuries but is alert and conscious.

Officers from the Speedway Police Department located and pulled over the silver Toyota near 7500 Crawfordsville Road a short time later. There was damage to the vehicle consistent with the collision that occurred on High School Road.

The driver of that vehicle was identified as 35-year-old Mayte Alaverez Rebollar of Indianapolis. Open alcohol containers were located inside the Toyota and the driver was suspected of being under the influence of alcohol. As a result of the preliminary investigation, she was arrested on the probable cause of operating a motor vehicle while intoxicated causing serious bodily injury, and leaving the scene of a crash causing injury.

All crimes mentioned in this release are alleged and all suspects are presumed innocent until and unless proven guilty in court. The charges listed are preliminary, actual charges will be determined by the Marion County Prosecutor’s Office upon review of the case.