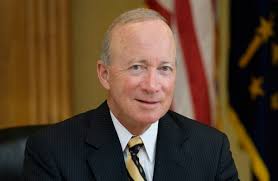 INDIANAPOLIS — The Purdue Board of Trustees announced today (June 10) its unanimous election of Dr. Mung Chiang, currently the John A. Edwardson Dean of Engineering and Executive Vice President for Strategic Initiatives, as the university’s next president. Dr. Chiang will replace current president Mitch Daniels effectively Jan. 1, 2023. Daniels has served since January 2013.

Following the announcement of President Mitch Daniels stepping down from Purdue University.

“My partner and friend, President Daniels, is part of a generation of proud Boilermakers who take small steps and turn them into giant leaps. Purdue University always has been a world-class institution with successful graduates spanning the globe, and Mitch has taken the university to even higher levels.

During his 10 years at the helm, Mitch has delivered higher education at the highest proven value, from freezing tuition during his entire tenure, to creating a national online university, establishing a network of Indiana STEM charter schools, and making record investments in world-class research.

He has always kept Purdue’s land-grant mission as its core strategy and spent each day opening the doors of higher education to every Hoosier willing to put in the work to be a Boilermaker.

I am eager to work with Dr. Mung Chiang as he takes the reins. I know he has had the opportunity to learn from the best and will keep the university’s forward motion moving at a fast pace.”

During Chiang’s five years at Purdue, he has led his college to its highest rankings ever, even as it has grown dramatically at both the undergraduate and graduate levels. Purdue is currently ranked No. 4 among graduate programs, No. 3 for online programs, and No. 8 for undergraduate education, and is the largest school in the nation’s top 10. Both government and industry-sponsored research funding have set new records, as do the 12 national research centers now housed at the university.

Meanwhile, Chiang has played a central role in establishing new relationships with federal agencies in the national security and economic development sectors, and in recruiting new companies to invest and create jobs in Purdue’s Discovery Park District. He spent 2020 as a scientific and technology advisor to the U.S. secretary of state on a prestigious Intergovernmental Personnel Act appointment.

Chiang earned a B.S. (Hons.) in electrical engineering and mathematics, and an M.S. and Ph.D. in electrical engineering from Stanford University. He came to Purdue from Princeton University, where in his role as the Arthur LeGrand Professor of Electrical Engineering, he was recognized for a number of innovations in teaching and was the first chairman of Princeton’s Entrepreneurial Council. The holder of 25 patents, he founded three companies and was named New Jersey’s CEO of the Year in 2014. Among many other academic honors, Chiang received the Alan T. Waterman Award in 2013 as the nation’s top scientist under the age of 40 for his excellence in edge computing, internet congestion, cloud, and video optimization, and other research areas.  Chiang’s research publications have received over 30,000 citations with an H-index of 81. He has graduated more than 50 Ph.D. students and postdocs, including 24 who have become faculty in research universities. His full biography is attached.

Chiang will lead a transition of his duties as dean while continuing his strategic initiatives assignment.

Board of Trustees Chairman Michael Berghoff said, “Mung is the ideal choice to lead Purdue into its next ‘giant leap.’ The board could not be more confident in this selection, as we have had the opportunity to observe his performance across a broad range of duties for five years.

“He has displayed not only academic excellence but also administrative acumen, effective relationship-building with academic, governmental, and business partners, and the skills of public communications. He brings the entire package of talents and experience necessary to take our university further forward. It is no surprise that Mung has been offered the presidency of several other schools, and the board is grateful that his loyalty to Purdue kept him here and available as this time of transition arrived.”