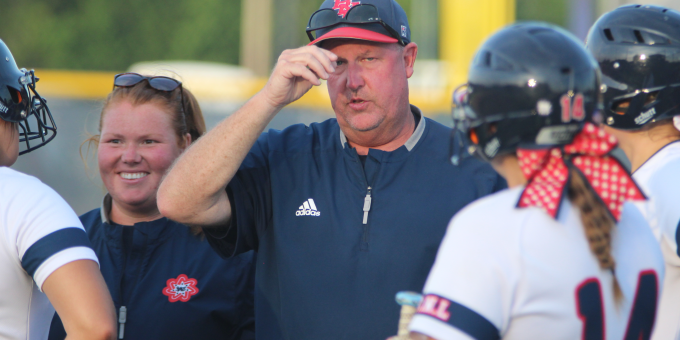 BEDFORD – There’s no place like home. Bedford North Lawrence didn’t have to click heels three times to get there, the No.5 Stars had to win three times in the postseason to make it back to their Oz. Now they have the dream chance – with a little magic, brains, heart and courage – to win a championship.

BNL will seek the first Class 4A semistate title in program history on Saturday, needing two victories to advance down the yellow brick road to the ultimate stage of the IHSAA state final. The first, and thus most important, obstacle will be conquering No.10 Shelbyville in the second semifinal. No.1 Roncalli will clash with No.7 Pendleton Heights in the opener at 11 a.m., with the winners returning for the finale at 7 p.m.

For the Stars (28-2 with a 13-game winning streak), the chance to compete for a great prize on home turf was a driving force, their over-the-rainbow wish as they winged their way through wicked sectional and regional trips. Now, with an overflow crowd expected to surround the natural amphitheater of the ballpark, they hope the Golden Bears (23-5 after winning their first regional in the program’s 36-year history) don’t douse them with water and melt their fantasy ending.

“This was the goal we had – just give us a shot, get us to the semistate at home,” BNL coach Brad Gilbert said. “We’ll roll the ball out there, and whatever happens, it happens. I’d rather be confident than nervous. I tried to tell the kids, what happens outside the fence doesn’t matter. It’s what happens inside the fence. Which teams plays the best should win.

“I just want to kids to give it everything they’ve got – if we play the way we’ve been playing, if we don’t make the moment bigger than it is.”

So far, no moment has been too big. BNL roared through the regular season, suffering two shutout losses against top-level pitchers, before handling Floyd Central, New Albany and No.13 Castle (8-1 on Tuesday) to reach the Elite Eight for the second straight season. The Stars got here with a dynamic, explosive offense (54 home runs and 7.7 runs per game), with fantastic pitching (Indiana State recruit and ace Annie Waggoner is 20-2 with a sparkling 1.17 ERA and 192 strikeouts), with a phenomenal freshman bashing balls to smithereens.

“Their lineup is dangerous, and they have such a good pitcher,” Shelbyville coach Mark Hensley said. “We know she’s a stud. Their record is no joke, they’re really good. It’s a little bit of a nightmare facing them right now. That’s when you start talking to yourself and pulling your hair out.”

Does that mean Shelbyville will bow down and monkey around? Not hardly.

The Bears got here the hard way, battling back from a seventh-inning deficit in the sectional opener against Bloomington South, avenging heartbreaking regular-season defeats while conquering Columbus North (2-1 in the sectional final) and No.2 Whiteland (4-0 in the regional). They own a pair of wins over Pendleton Heights. They will not blink.

Shelbyville features arguably the best 1-2 punch in the tournament, with Kentucky recruit Karissa Hamilton (.543 with 38 RBIs as a senior catcher) and Mississippi State recruit Kylee Edwards (.556 with 39 RBIs as a junior shortstop).

“It’s a rarity to have two SEC girls playing on the same high school team,” Hensley said. “With them, their leadership and skill level is off the charts. Defensively they bring an added edge, they make every single play, and it’s nice to see our field generals there. They are everything you would expect out of SEC players.”

Shelbyville’s worry will be containing BNL’s ferocious attack, thus the spotlight shines on sophomore pitcher Cheyenne Eads (14-4 with a 1.77 ERA). She’s not a power hurler, she relies on spin, guile and guts.

“She’s not a flame thrower, she won’t throw it past people,” Hensley said. “Watch her warm up and people think they’ll tee off on this girl, then the next thing you know it’s the end of the game and you haven’t scored. She’s just so good at placing the ball, she spins it really well, she’ll junk-ball you to death. She gets people to swing at her pitches. She won’t be the most impressive force you’ll see.

“We’re expecting it to be a really close game. We’ll have to find a way to scratch a run or two across, we have to keep the ball inside the park. There’s no doubt in my mind they’ll score a few runs, we have to keep it to a minimum and not let them explode. We can’t let them have a big inning or it will be over really quick.”

“She likes to move it around,” Gilbert said. “She does spin it well. We’ll have to hit like we’ve been hitting, find some holes and get some key hits. We’ll have to be patient and hit our pitch, see what happens.”

So far, if the trend continues, BNL wins when it scores. It’s that simple. Shelbyville could also be short-handed. School graduation is set for Saturday, and two other senior starters are deciding whether they will compete on the diamond or walk the aisle to receive their diploma. That’s an unfortunate dilemma.

“I like the way we match up on paper, but the game’s not played on paper,” Gilbert said. “We have to make sure we hit well, play good defense, pitch well. That’s why last year (a loss to Mt. Vernon in the semistate semifinal at Center Grove) is so huge, we got a taste of it. It should be a little more comfortable. Win or lose, as long as we play our best and make the other team earn it, that’s all you can ask for.”

Roncalli vs. Pendleton Heights: In the first game, all eyes will be on Roncalli star Keagan Rothrock, the nation’s top pitching recruit who’s headed for Florida. Her stats (leading the state with 331 strikeouts, 24 wins and 8 no-hitters, thanks to a 70-mph heater) are incredible. And her hitting numbers (.521, 13 HRs, 50 RBIs) are impressive.

Yet the Royals (30-0 and ranked as the nation’s best team by MaxPreps) were pushed by the Arabians (25-6) in the season opener on April 7. Roncalli won that one 10-6, and those runs represent the bulk of what Rothrock has allowed (20 runs total) this season.

The semistate champion will advance to the state championship game at Purdue University on June 10-11. Exact days and times for each class final will be announced following the semistates. The northern semistate at West Lafayette features Crown Point and No.15 Penn in the opener, followed by Columbia City and No.9 Harrison.

Game notes: BNL is chasing its first semistate title, while Shelbyville is coming off the first regional crown in program history. The winner will advance to the semistate final at 7 p.m. The Stars fell to Mt. Vernon 2-1 in last year’s semistate semifinal at Center Grove.