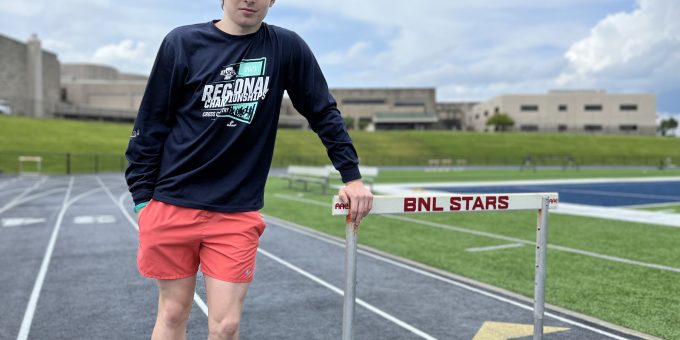 BEDFORD – The race is 300 meters, with eight hurdles, but who’s counting? Each obstacle is 39 inches high, but who’s measuring? The only numbers that matter to Bedford North Lawrence junior Zane Thompson are those on the clock, and those standing on the awards podium at the conclusion of the state championship race.

Thompson, competing in the IHSAA state meet for the second straight year, is tantalizingly close to reaching the key numbers. He plans to put his foot down, and his best foot forward, when he streaks off the start line and toward the finish in his signature event on Saturday at Indiana University.

For a hurdler, putting the foot down doesn’t mean what the rest of the world has known since the 1600s, when the phrase appeared in the lexicon. Rather than taking a firm stand, it means getting his foot back on the track as quickly as possible once the hurdle is cleared. Nobody can run fast in mid-air. That’s a lesson he learned during his first state appearance, when he settled for 22nd place.

“The only thing I focus on over the hurdle is getting my foot down quick, just getting to the dry phase again,” Thompson said. “Last year I could tell I was losing a lot of time getting over the hurdle, staying airborne while everyone else around me was getting the foot down and pushing past me.”

When his feet dig into the track surface, Thompson is blazing fast. He broke the school record with a run of 39.91 in the Hoosier Hills Conference meet, then clocked 39.92 during last week’s regional at Bloomington North. A slight stumble on the seventh hurdle cost him precious time and a victory as he crossed in second place. As he stands, he is seeded 12th for the state meet, although he’s a scant .5 seconds away from fifth. That means the margin for error is minuscule.

“That’s why I think he definitely has a shot at the podium,” BNL coach Brett Deckard. “Without the stumble, he’s low 39s or even high 38s. The potential is there to be high on the podium (with a ninth-place finish or better).”

Thompson has the perfect skill set for the race – a sprinter’s speed and a fearlessness. That’s a rare combination, but so is the ability to race that far at maximum velocity while navigating eight jumps.

“It takes a really strong 400 runner that can jump,” Deckard said. “Zane is a good sprinter, he has the ability to jump. He’s not scared. Some kids can run but they can’t jump, or they’re afraid to jump.”

The only thing that concerns him is the unfortunate mishap. He landed in a competitor’s lane during the regional but escaped disqualification when he didn’t impede the other runner. Or a hurdle could get accidentally kicked in his way from another lane. Don’t think, don’t worry about which leg he jumps with (he prefers to lead with the left foot over the hurdle), just run.

“I do feel confident, but anything can happen at all times,” Thompson said. “It does scare me a little bit. Not finishing is the worst.

“If I don’t get out fast enough, it’s impossible. I have to go really fast at the start and just stay strong at the end. Don’t get anxious, just stay calm, be ready to race. It’s a long day. I was drained last year before I even got to race time. Stick with that I’ve been doing all season, just don’t get anxious. That’s the key.”

Field events are scheduled to begin at 3 p.m. The four heats for the 300 (with Thompson in the third) are set for 7:20. Brownsburg’s John Colquitt, the defending state champion, is the top seed at 38.28.