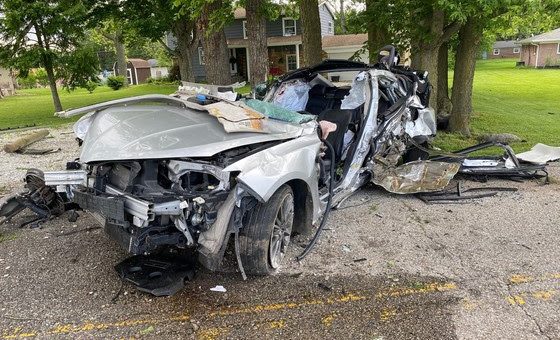 GREENFIELD – A police investigation that began in Anderson led to a vehicle pursuit in Greenfield, resulting in a single-vehicle crash. Earlier this morning Anderson Police Officers were investigating a stolen vehicle that was located at a hotel in Anderson.

When officers approached the occupied vehicle the male suspect allegedly became combative and physically resisted the officers. The suspect got in the stolen vehicle and fled the scene. An officer from the Anderson Police Department was injured in the incident and was not able to pursue the vehicle with his police car. The officer’s injuries are reported as minor.

Information about the stolen vehicle was shared with the Indiana State Police and other agencies. At approximately 7:20 a.m. Troopers located the vehicle near Apple Street and Morristown Pike in Greenfield. Officers from the Greenfield Police Department and the Hancock County Sheriff’s Office were also in the area and assisted. The suspect once again fled from police in the vehicle driving south on Morristown Pike.

The suspect failed to stop at a four-way stop on Morristown Pike at Davis Road. After crossing the intersection the suspect lost control of the vehicle, the vehicle left the road to the left, struck and broke a utility pole then collided with several trees. The adult male driver had to be extricated from the vehicle by the Greenfield Fire Department and he was transported by ambulance to an Indianapolis hospital in critical condition. There were no other vehicles involved in the crash and no other injuries were reported.

The information above is preliminary and the investigation is ongoing. Morristown Pike is still closed south of Davis Road for further investigation and removal of the wreckage.