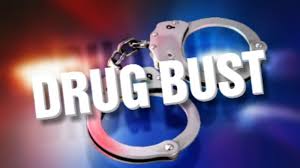 BEDFORD – A man and woman were arrested on drug charges Tuesday, May 23rd when a Bedford Police Department officer saw the driver of a red Ford Explorer make a right turn from 24th Street to turn north onto Mitchell Road.

As the driver of the Explorer began traveling north on Mitchell Road, the driver immediately slammed on the brakes and made a U-turn, crossing all four lanes of Mitchell Road and then proceeding to go back east on 24th Street.

In the vehicle was the driver 39-year-old James Barber, of Florida, and his passenger 32-year-old Breanna Pearson, of Bedford.

The officers asked if there were any weapons or illegal drugs in the vehicle.

Barber advised “no, however he was posturing himself up in the seat, attempting to block me from looking in,” the officer wrote in the probable cause affidavit.

The officer then asked for consent to search the vehicle. Barber granted permission.

During the search of the vehicle, the officer found multiple used syringes in a backpack. The syringes tested positive for meth. Police also found two smoking devices and additional used syringes. Officers located a loaded Taurus G2C 9mm handgun wedged between the driver’s seat and center console, an extended magazine to the Taurus G2C in the rear seat of the vehicle, syringes, and a digital scale inside the bed of the truck.  Officers also found a contact lens container belonging to Parson that tested positive for meth.