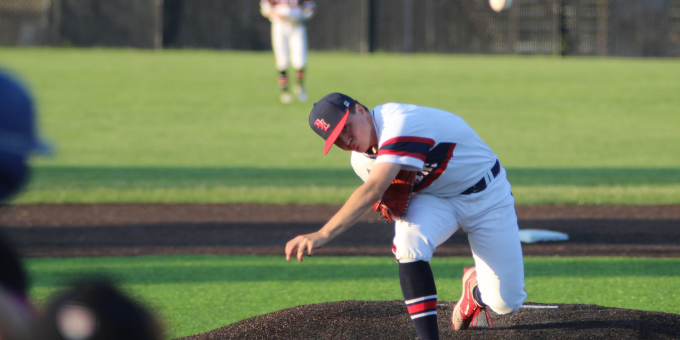 BEDFORD – Walker Ward was in more trouble than a mischievous kid in the principal’s office. He wasn’t going to talk his way free of this predicament without punishment. He had to pitch his way out.

With no margin for error, protecting the slimmest of leads, Walker dove through a ring of fire without a singe mark or blister as Bedford North Lawrence completed the regular season with a tense 1-0 victory over Whiteland on Tuesday afternoon. Kylar Fisher drove in the only run as the Stars (14-14) won their fourth consecutive game to establish momentum for the postseason.

Almost every inning of his four-frame relief stint, Walker was dodging potential danger. And his best escape was the last one, when the Warriors (11-15) had runners on second and third, with only one out, and the top of the lineup lurking. Walker, evidently wearing teflon because nothing stuck, recorded a key strikeout, then got a fly ball to Cal Gates in right field to end the suspense.

“He made some pitches,” BNL coach Jeff Callahan said of this cool sophomore lefty. “He did a nice job out there. He’s really maturing as a pitcher.”

Ward and starter Ryker Hughes combined on a five-hit shutout, and BNL shook off four errors with some crucial defensive plays. The Stars misplayed some easy ones but made the difficult look routine as Trace Rynders made a fabulous diving catch in left field, Ward picked off a runner in another key spot in the fifth, Grant Dalton nailed a runner attempting to stretch a single into another base to end the sixth, and Jonny Stone threw out a base stealer at third in the fourth.

“I just had to trust my defense,” Ward said. “There were some big plays. I just hit my spots. The last inning it worked a lot better. That strikeout was a big out.”

The last-inning jam was partially his fault, when he walked the lead-off hitter (a cardinal sin) and gave up a soft liner to right by Whiteland’s Julian Prescott. Peyton Emberton dropped down a terrific bunt, with Kaedyn Bennett making a tough play to get him at first as both runners advanced. But Ward deflected that problem with a strikeout of freshmen leadoff hitter Maalik Perkins, then got Donovan Woodall on the final fly ball.

That was two hours and six innings after the only run.

BNL manufactured a run in the first. Dalton drew a walk (he would do that four times as two Whiteland pitchers issued 8 total walks), went to second on a balk, and took third when Bennett dropped a perfect bunt for an infield single. Fisher followed with a one-out single to left off Whiteland starter Caden Wilburn.

And that was it. Not that BNL didn’t have chances. Multiple opportunities. The Stars left a whopping 13 runners on base, which is hard to do and still survive.

“We had the recipe for a loss, but we didn’t,” Callahan said. “That’s the sign of a team playing together and finding a way to win a game.”

Fisher had two of BNL’s five hits. Brayden Roy was 3 for 3 for the Warriors.

BNL, who missed Kline Woodward while he sat out with a sprained left ankle, will now focus on the sectional. After a turbulent season of streaks, peaks and valleys, the Stars are now trending in the right direction.

“I think we’re coming in prepared and ready,” Ward said. “Coming off a four-game winning streak helps. You have to keep a level head, keeping doing what is working. You can’t get too excited.”

“It feels a lot better than a couple of weeks ago, when we were on a five-game losing streak,” Callahan said. “But we’re pleased. We’re playing with a little more confidence. We’re still pitching it pretty well. That will give us a chance.

“If we’re going to win on Saturday, we have to play well in all three phases. We have to get ahead of hitters, get the lead-off guy out, make plays behind him, and get the key two-out hits.”

BNL, which drew a first-round bye, will meet Seymour for the third time this season in the Class 4A semifinal at Jennings County on Saturday at approximately 1:30 p.m. The first-round games are scheduled for Wednesday. The championship is set for Monday at 11 a.m.