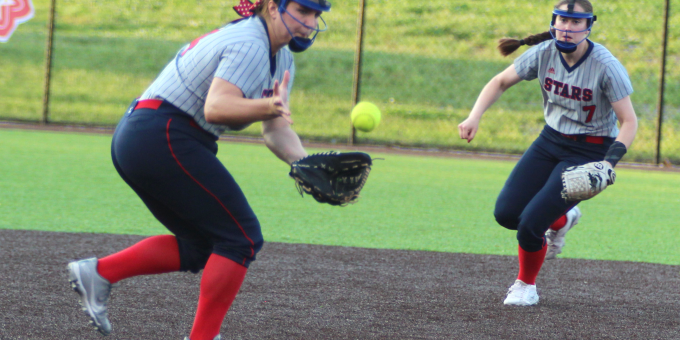 BEDFORD – The performance impact of an emotional Senior Night is as unpredictable as the stock market. Too much pomp and circumstance, photo opps, wistful and tearful memories and careful construction of the perfect ending for the final appearances on the home turf. The game is one of routine and repetition, and all the chaotic disruption of the system can create havoc rather than insure success.

Nerves were jangling. Bedford North Lawrence, ranked No.5 and destined for something serious, was locked in a tense clash with Terre Haute South, which was not rolling over to play the pedestrian part of cutting board for BNL’s final meal. The Stars were on edge, ready to celebrate the senior fivesome rather than focused on pounding the ball and the Braves in the expected fashion.

With the happiness of the elders at stake, the young kids came through, with two freshmen cracking the key hits as BNL finally pulled away from danger to vanquish the foe. All was well, let the tears of joy flow rather than those of bitter disappointment.

Protecting a late 3-1 lead, Tori Nikirk and Ava Ratliff – who one day will have their own senior celebrations – had key hits during a four-run sixth inning as the Stars stopped South 7-4 on Friday night, capping the careers of seniors McKaylin Turner, Carlee Kern, Carsyn Alvey, Maddy Bennett and Emma Foreman with the 25th win of the season.

Normal had dissolved into disarray. The lineup had been shifted, ace hurler Annie Waggoner left midway through the contest with an illness, and the powerful offense was dormant. It’s happened so many times during these festivities. Change is not always good. BNL coach Brad Gilbert could sense the abnormal energy, and his team needed the jolt of a jumpstart.

It finally came in the sixth. Turner’s walk and Kern’s misplayed bunt set the stage, but the crucial swings came from Aliza Jewell (RBI single to right), Nikirk (sharp two-run single to left) and Ratliff (RBI double to center). That gave BNL a 7-1 lead and enough breathing space to fend off the pesky Braves (14-12) in the last inning.

“We probably didn’t play our best,” Gilbert said. “The energy was really funny,. Maybe a lot of nervous energy. But we pitched well and played defense well.”

The spotlight was on the senior class, deservedly so. Each contributed something in their final curtain call. Foreman, playing for only the second time all season after suffering a knee injury that will require surgery, got a start in right field. The other four either collected hits or scored runs. This was their night, from catching the pregame ceremonial first pitches from their fathers to escorting their families for the postgame group hug.

But without the first-inning RBI double by Braxton McCauley, without the two-run blast by Ratliff in the third, without the unexpected three innings of relief work by Jewell in the circle, without the late explosion, this could have been spoiled.

“We didn’t play our best, but it’s a lot of emotions that have an effect,” Kern said. ‘It’s really an accomplishment, especially to have all our seniors out here. It’s special to win one last time together.”

This group has been through so much, starting with the Little Stars program when they were barely big enough to drag a bat to the plate, through Little League, through countless hours and miles of travel ball during hot summers.

”I’m so thankful,” Gilbert said. “There were a lot of coaches, a lot of hours and travel, and it’s very cool to see them go from LIttle Stars and watch them, to see all the success they’ve had and now go 25-2. That’s back-to back 25-win season. It shows their commitment.”

For the record, McCauley had three hits, Ratliff ripped two extra-base hits (including her 19th homer, second in the state), NIkirk scored three times, Waggoner had two hits and struck out 8 in four innings of toiling in the circle before her early exit.

Izzy Light, Peyton Simmons and Kyar McVey all had two hits for the Braves.

BNL concluded the regular season with a 10-game winning streak. What a great run it’s been.

“I knew we would be good,” Kern said. “We lost a few people from last year, but people have come into their roles and been great. I feel like we’re right where we were last year.”

Here’s where they are – ready to defend a sectional title. BNL will await the Floyd Central-Seymour winner in the semifinal round of the Class 4A sectional at Floyd Central on Wednesday.