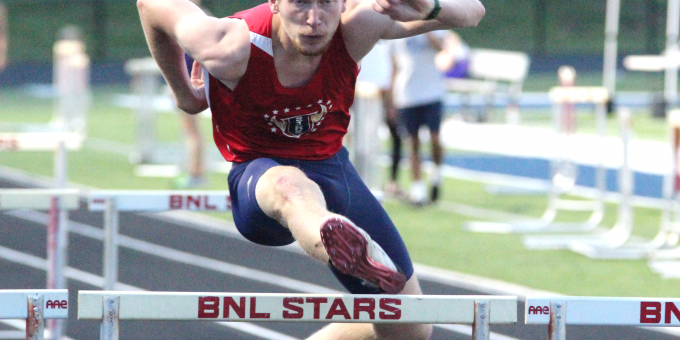 BEDFORD – The crash was Noah Carter’s greatest fear. His senior year, the sectional race on his home track, and Carter went down midway through the final of the 110-meter high hurdles. His dreams seemed to fall with him.

Second chances in this sport are rare, but Carter was granted a reprieve. During the high-risk race, a competitor kicked a hurdle from another lane down in front of Carter, who could not avoid stepping on the fallen obstacle as he was contending for the lead. And for a 6-foot-7 kid, who’s leaping over a 42-inch barrier at top speed, that’s a long way down. Race officials ruled interference, and gave Carter a “rerun” of the final.

The caveat? Carter had to wait until the conclusion of the meet, then run alone against the clock and use that time to place him in the field. Pressure? Carter smiled. “No, none at all.” Of course, there’s a huge amount of sarcasm in that statement. With everyone watching, with his postseason in the balance, Carter was under the gun.

In a testament to mental toughness, Carter cruised to a time of 15.49, claiming second place and a ticket to the IHSAA regional next week at Bloomington North. The top three in each event qualified for the second stage of the state tournament series.

In less than 16 seconds, Carter went from crestfallen to jubilant. When he tumbled to the track, he thought his career was finished. When he dashed across the finish line and got the thumbs-up from the timer, having bettered the time of 16.07 that was the third-place target, he knew his future – for at least one more week.

“I was real frustrated and disappointed,” Carter said of the mishap. “That’s not how I wanted my last hurdle race to go for my senior year. I stepped off the track and tried to clear my head. I’m glad I got the second chance.

“I had to channel the frustration I had after the first race. I just focused, set a goal and ran through it in my head. It was definitely weird (to run alone). But I guess it went well.”

Salem’s Braden Cummings won the race in 15.43, but all that mattered to Carter was the chance for redemption.

“That’s his race,” said BNL coach Brett Deckard, who could recall only three other such incidents during his 30 years in the sport. “He was upset, but it wasn’t his fault. I’m happy for him, as a senior.”

Carter will be joined by Zane Thompson and two relays in the regional. Thompson blazed to victory in the 300 low hurdles in 40.90. The Stars recorded a mild upset in the 3200 relay, finishing third in 8:43.09 (after being seeded sixth in the race) as Karter West was inserted into the lineup (with Jonah Bailey, Cameron Haste and Carson Kelly) and helped BNL carve 15 seconds off its previous best time.

BNL also finished second in the 400 relay, with Thompson, Maddex McFarland, Cole Baker and Christian Garciano-Curren teaming to clock 44.09 (with Salem winning in 43.56).

“I don’t have the fastest kids, but I have four fast kids,” Deckard said. “And they run well together.”

BNL was fourth in the team standings with 80 points. Jennings County, bolstered by an outstanding distance corps, won the title with 124 points.

BNL’s contingent will join qualifiers from sectionals at Bloomington, Jeffersonville and Terre Haute in the regional on May 27. The top three in each of those events will advance to the state finals on June 4.