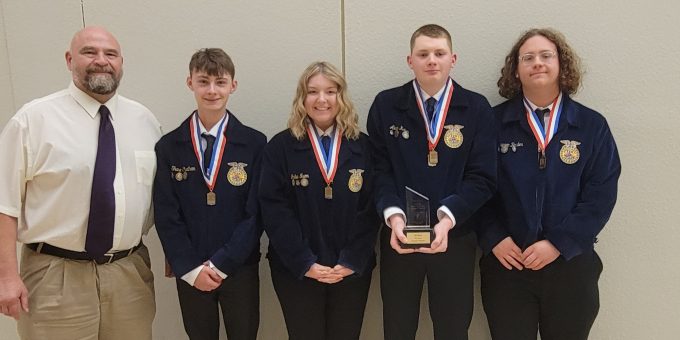 ORLEANS – The Orleans FFA soils evaluation team participated in the National Land and Range Judging contest held on May 5th near Oklahoma City, Oklahoma. This year’s event involved more than 800 students from 34 states. The contest is known to be the largest annual competition for high school youth in the country.

The members of the team included Aiden Keller, Julia Isom, Dragon Pender, and Shane Cheatham. Prior to the contest, the team practiced in various locations around Oklahoma to familiarize themselves with the characteristics of the area’s soils.

The contest was held near El Reno, Oklahoma at the Cheyenne Arapaho Tribal Headquarters.

National championship trophies were awarded at a dinner banquet Thursday evening at the National Cowboy & Western Heritage Museum. The Orleans FFA team placed 5th in the nation at the awards ceremony. In addition to the team’s accomplishment, Aiden Keller placed 5th as an individual, and teammate Julia Isom placed 11th as an individual.

This is the fifth time that a team from the Orleans FFA has achieved the honor of placing in the top five at the National Land and Range Judging Contest.