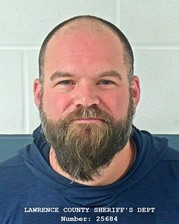 In the plea deal, Crane agreed to plea guilty to false informing a Class B misdemeanor. Judge John Plummer III accepted the plea deal and sentenced Crane to 182 days in jail and suspended the sentence. Crane was also sentenced to six months of supervised probation.

According to a probable cause affidavit released by special prosecutor David Thomas, Indiana State Police Organized Crime and Corruption Unit, it was discovered Crane created and submitted a written report on October 3, 2020,  that included false information about the collection of methamphetamines.

Bedford Police Chief Terry Moore, who was suspicious about the report requested ISP OCCU to investigate the incident. Sgt. Crane was placed on administrative leave.

Several interviews were conducted and the suspected meth in question was collected by ISP from the Bedford Police Department along with verifying documentation. ISP also obtained a search warrant for Sgt. Crane’s phone. Numerous messages were found between Sgt. Crane and a female. Those messages included information about the incident.

Investigators say Sgt. Crane told fellow officers during a group meeting he was receiving drug information from a woman. Other officers knew the woman and suspected she was still an active meth user and questioned her information. However, Crane maintained she was a past user but was now clean.

The woman had complained to Sgt. Crane that she believed her boyfriend was still using meth and wanted police to arrest him.

The discovery of the drugs, according to the woman and later by Sgt. Crane, had occurred after the woman contacted Crane who was on duty. She asked him to come to her home in Bedford. She wanted Crane to unlock her boyfriend’s van and search it for meth.

Although it was against Bedford Police Department policy to unlock the vehicle, Sgt. Crane agreed to do so and unlocked the vehicle.

Sgt. Crane and the woman then searched the van and found approximately an ounce of methamphetamine. No search warrant was obtained to do this.

The woman did not want anything done at this point, because she wanted her boyfriend to be arrested later to give her time to move to Florida.

Sgt. Crane agreed and took possession of the meth.

The two then devised a plan for the woman to call the department anonymously and lie stating the meth had been found on the ground behind a local restaurant.

Both the woman and Sgt. Crane admitted the information during their interviews.

The woman on October 3, 2020, called the Bedford Police Department reporting the finding of the drugs on a recorded line. On the same date Sgt. Crane generated his report.

In his report, Sgt. Crane said the call was received from an anonymous caller and the drugs were found in the parking lot of the establishment, although investigators say he already had the meth in his possession after taking it out of the van.

During the interview, the woman did partially admit the statements she gave Sgt. Crane on October 3, 2020, were true and resulted in Sgt. Crane writing the report.

The woman, during an interview, told investigators she and Sgt. Crane agreed she would anonymously call when she discovered meth.

On October 27, 2020, investigators gave Sgt. Crane the opportunity to explain what happened. He maintained the report was accurate, but he did admit that he allowed the woman to call in the discovery of the drugs anonymously even though this was untrue.

Sgt. Crane further admitted he did take the meth from the van and had not found it in the parking lot.

In a later interview on December 22, 2020, the woman was confronted with inconsistencies in her earlier statement. She maintained the same agreed-upon plan with Sgt. Crane on the reporting of the methamphetamine, but apologized for not being truthful earlier. She claimed that Sgt. Crane was the one who found the drugs in the van, and Crane came up with the idea for her to call in the drugs anonymously.

“There are many reasons why a police department cannot allow its officers to generate written reports that deliberately contain false information, especially when the criminal drug activity is involved. Other police officers rely on these written reports and can cite these allegations in other cases where people can be arrested. Accordingly, justice is obstructed when a deliberately false report is submitted and retained within the BPD system. For purposes of the official misconduct charges, I am advised by the senior prosecutor appointed to this case that Crane qualifies as a police officer as a “public servant” (I.C. 35-31.5-2-261(1)) in the official misconduct statute. I also believe it is “material” to any drug possession case where, when and by whom the illegal drug is detected and collected,” wrote ISP OCCU Detective Craig Starr.

Investigators concluded that Sgt. Crane knew the information in the report was false and that he violated Bedford Police Department policy by unlocking the locked van without a search warrant to search for drugs. Sgt. Crane also knew it was not an anonymous caller reporting finding drugs in the parking lot when in fact he had the meth in his possession.

Investigators also have Facebook messages between the woman and Sgt. Crane detailing their plans.