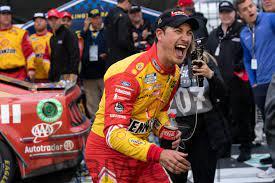 DARLINGTON S.C. – Joey Logano of Team Penske was the winner of the Goodyear 400 at Darlington. This was his 28th career NASCAR Cup Series victory, his first of the season, and his first at Darlington. His margin over second-place Tyler Reddick was .775 of a second.

After Logano gave Byron’s Chevrolet a jolt entering Turn 3 on the white-flag lap, Byron shot up the track into the outside wall and fell back to 13th at the finish.

Driving a No. 22 Ford sporting the throwback paint scheme of his first quarter-midget racer, Logano beat runner-up Tyler Reddick to the finish line by 0.775 seconds to earn his first victory at Darlington and the 28th of his career.

Logano now has won at least one race in 11 consecutive Cup Series seasons.

“Yeah, you’re not going to put me in the wall and not get anything back,” Logano said, apparently referring to earlier contact from Byron’s car. “That’s how that works. Man, super proud of the Shell-Pennzoil team, getting a victory here in Darlington. You know what it’s like — I’ve never won here in a Cup race before.

“So proud of this race team. Great execution all day long. I’ll tell you what, the coolest thing is getting this car into Victory Lane. This is the car where it all started for me back in ’95 in a quarter midget. Really, honestly, all the young kids racing out there right now — this could be you.”

An incensed Byron clearly thought Logano crossed the line with his aggressive maneuver.

“We were really close off of (Turn) 2, and I think it spooked him and got him tight, and he was right against the wall, and I got the lead,” Byron said of a restart on Lap 268. “He’s just an idiot. He does this stuff all the time. I’ve seen it with other guys.

“He drove in there 10 mph too fast, and with these Next-Gen cars, he slammed me so hard it knocked the whole right side off the car, and no way to make the corner.

“Yeah, he’s just a moron. He can’t win a race, so he does it that way. I don’t know, we’ll … yeah, it was close racing on the restart. We were faster than him. Obviously, at the end the right rear (of Byron’s car) started to go away, and, yeah, he didn’t even make it a contest.”

Justin Haley ran third, followed by Kevin Harvick, who posted his 13th straight top-10 result at the “Lady in Black” — a track record. Chase Elliott started at the rear of the field in a backup car and finished fifth.

A massive wreck off Turn 2 on Lap 260 of 293 took out more than a handful of front-running cars and set up the final restart. Martin Truex Jr., who had restarted on the inside of Row 2, lost momentum in the corner and slid back between the Chevrolet of Ricky Stenhouse Jr. and the Ford of Harvick.

Ill fortune led to the demise of three of the strongest cars before the race reached the halfway point. On Lap 112, second-place starter Kyle Larson brought his No. 5 Chevrolet to pit road and retired with engine failure.

Lap 167 brought the downfall of Kyle Busch, who had led 19 laps. The No. 6 Ford of Brad Keselowski pounded the outside wall in Turn 2 and collected the Toyota of Busch, eliminating both cars from the race.

Ross Chastain collected the Stage 2 win, but his elation was short-lived. Moments after the subsequent restart on Lap 194, Chastain’s No. 1 Chevrolet spun to the inside of Hamlin’s Toyota near the exit of Turn 2 and nosed into the inside wall, ending his race.

By the time the race ended, 13 of the 36 cars already were in the garage, equaling the number of DNFs last month at Talladega Superspeedway.

There were nine caution periods for a total of 47 laps. Twenty of the 36 drivers in the Goodyear 400 finished on the lead lap.

Chase Elliott remains the championship leader after Darlington with a 65-point advantage over second-place William Byron.

Harvick earned his second top-five and sixth top-10 of the season, and it was his 13th top-five and 18th top-10 in 29 career NASCAR Cup Series starts at Darlington.

Harvick’s 13 top-fives and 18 top-10s at Darlington are the most among active NASCAR Cup Series drivers. Denny Hamlin is next best with 11 top-fives and 15 top-10s.

This was Harvick’s 13th straight top-10 at Darlington. He hasn’t finished outside the top-10 since a 16th-place result in May 2012. Harvick now owns the record for most consecutive top-10s at Darlington, beating the former record holder, Bill Elliott, who scored 12 top-10s between April 1985 and September 1990.

“I felt like we finished probably better than we should have, but I think the guys did a good job on pit road with our Rheem Ford Mustang. The last run was probably the best that we were, just being able to hold on. We just couldn’t hold on once it started getting cooler, but we wound up with a good call there and got the caution and wound up in the right spot, and then we were able to capitalize on it,” said Harvick, driver of the No. 4 Rheem / Chasing a Cure Ford Mustang

Harvick led one lap to increase his laps-led total at Darlington to a series-leading 813.

Aric Almirola earned his seventh top-15 of the season and his sixth top-15 in 14 career NASCAR Cup Series starts at Darlington.

“We had a top-10 car all day. It’s a really good sign to see that from week to week, especially at two difficult tracks like Dover last weekend and Darlington today. Drew (Blickensderfer, crew chief) and the team worked hard all day to give me what I needed. The pit crew really showed up today, too. Fortunately, we missed that wreck there toward the end that got us our track position back. It was such an honor to run my grandfather’s sprint car paint scheme that I grew up watching. That meant a lot to me and a lot to him. I wish we could’ve brought it to victory lane one last time, but 11th wasn’t a bad way to finish my final Darlington Throwback Weekend,” said Almirola, driver of the No. 10 Smithfield Mustang

Since joining SHR in 2018, Almirola has only one finish outside the top-20 at Darlington.

Darlington served as a milestone for Rheem, the primary partner on Harvick’s No. 4 Ford Mustang. America’s No. 1 water heating brand and major air conditioning and the heating manufacturer is commemorating its 15th year in racing, and the Goodyear 400 marked its 500th race as a NASCAR sponsor.

The next event on the NASCAR Cup Series schedule is the AdventHealth 400 on Sunday, May 15 at Kansas Speedway in Kansas City. The race begins at 3 p.m. EDT with live coverage provided by FS1 and SiriusXM NASCAR Radio.