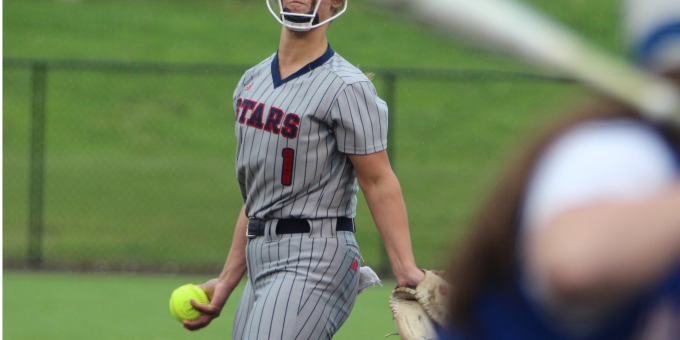 BEDFORD – Slippery when wet, with a constant spittle of rain causing physical distress and mental discomfort, gripping the softball was like tackling one of those greased pigs at the county fair. Think you’ve got it under control? Think again.

Annie Waggoner spent more time with a towel in hand than a lifeguard at the pool, exchanging wet balls for semi-dry ones between practically every pitch as Bedford North Lawrence assistant coach Whitney Carroll earned MVP honors for her drying work in the dugout. Between the raindrops and delays, the Stars came away waterlogged but sun-baked in the glow of a championship.

Despite the problems, and a shocking early deficit, No.4 BNL clinched a share of the Hoosier Hills Conference title with a slip-and-slide 12-5 victory over Jennings County on a dreary gray Thursday. Waggoner struck out 12, and Ava Ratliff matched the single-season school record with the 17th bomb of her rookie season as the Stars (17-2) improved to 5-0 in the league.

So the banner that hangs outside the BNL dugout will need an addition. This championship will be BNL’s fifth overall, and second straight, although there’s still the unfinished business of a conference clash with Seymour (on May 10).

“We want the whole thing,” BNL coach Brad Gilbert said. “It is nice, but everybody in the program won’t be happy with a share. We want it outright.”

Jennings County (8-11, 0-5) made the Stars work for this one and sweat a little, even in the rain. Alexis Carson’s stunning 3-run home run off the left-field foul pole in the top of the first jolted everyone at the ballpark, forcing BNL to trade water walkers for hitting shoes. The Stars scored four in the first, then took control with five in the fourth to pull away.

“I knew we would hit the ball, put pressure on them,” Gilbert said. “I knew we would battle back. The thing we were impressed with was how we well we hit every pitcher (the Panthers tried three different hurlers in the circle). We didn’t need that time through the lineup, we did a good job of adjusting to whoever they threw. I was pleased with that.”

BNL struck quickly against JC starter Mackenzie Matern. Lauryn Anderson stroked a single, Waggoner followed with a liner to right, and Ratliff ripped a vicious line drive to left for the first run. Braxton McCauley launched a sacrifice fly for the second, and pinch runner Britta Warren scampered home on a wild pitch for the third. After Aliza Jewell walked, Carsyn Alvey hammered a low liner to left, with the ball skipping past JC outfielder Elizabeth Evans as she made a diving attempt for a difficult catch. Jewell scored from first for a 4-3 lead.

The Panthers didn’t shrivel like fingertips from too much moisture. They answered with two runs in the second to retake the lead (without benefit of a hit) with a hit batter, a walk, a wild pitch and a double steal. That’s the ultimate in manufacturing a rally.

BNL retaliated with two out in the second when Waggoner singled and Ratliff clobbered her record home run (also adding to her state lead) to center for a 6-5 lead.

The Stars found dry land in the fourth against JC reliever Kassidy Beal. Two walks and Waggoner’s scorched infield hit set up Ratliff with the bases loaded. She was unintentionally walked on four pitches (although it looked intentional). McCauley lined out, but the Panthers threw the ball away while trying to double pinch runner Haleigh Canada off second base. Two runs scored, and Jewell doubled in a run. Carlee Kern cracked a triple down the right-field line to make it 11-5.

BNL added a final run on Waggoner’s sacrifice fly in the fifth.

Waggoner (12-2) rarely had an easy inning. Nothing was easy with the conditions, because the turf field absorbed the precipitation like a sponge but generated a wet bounce, and JC didn’t go down in order until the fifth. She gave up six hits and four walks but ran through the car wash without too much damage.

“It got me out of my rhythm,” Waggoner said of dealing with the rain. “That’s part of my game, so I definitely had to adjust to that. And I’m a spinning pitcher, so trying to spin the ball while it’s wet, and have a slick mound on turf, was a lot. You had to adjust to what you’re given.”

“As far as holding the ball, because every time it hit the turf it got wet, as far as conditions, there’s not much worse,” Gilbert said. “Pitching is so much feel and touch.”

Waggoner went 3-for-3 at the plate, Ratliff had two hits and raised her season RBI total to 39 (tied for third in the state) with four more. There are other stats to ponder, although the fact BNL has mathematically earned a share of the league crown wasn’t in the postgame celebration equation.

“We haven’t played our last game yet,” Waggoner said. “We’re going for it all. We’re not taking ‘no’ for an answer.”

The Stars will visit Bloomington North on Friday.