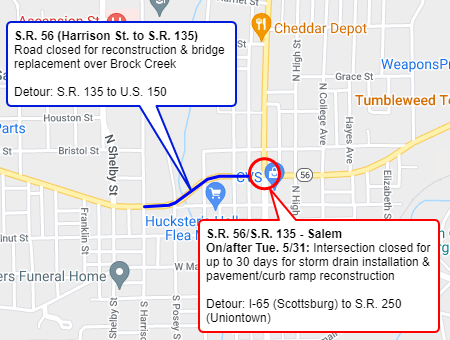 WASHINGTON CO. — Indiana Department of Transportation contractor Milestone Contractors LP plans to close the intersection of S.R. 135 and S.R. 56 in Salem on or after Tuesday, May 31, to continue work on a $13.2 million roadway reconstruction project that began in March.

Following the Memorial Day holiday, the intersection will close for up to 30 days as crews install storm drains and reconstruct the pavement and curb ramps in the area. The official detour for the intersection closure is I-65 at Scottsburg (Exit 29) to S.R. 250 at Uniontown (Exit 41).

State Road 56 remains closed between S.R. 135 and Harrison Street for pavement reconstruction. Replacing the bridge over Brock Creek is also planned. By the end of the contract, nearly a mile and a half of pavement on S.R. 56 will be replaced between S.R. 60 and S.R. 135. The reconstruction portion of the project is scheduled to be complete in the fall of 2023.

Patching, milling, and paving are also scheduled this year on a short section of S.R. 135, north of S.R. 56. State Road 135 will remain open to traffic throughout the paving project, but with lane closures and flagging. The completion date for resurfacing S.R. 135 is in late June 2022.

The contract was awarded to Milestone last December for a total of $13,292,500. Drivers are reminded to slow down, use extra caution, and drive distraction-free in and near construction zones. All work is weather-dependent and schedules are subject to change.

Additional information about the project can be found here.