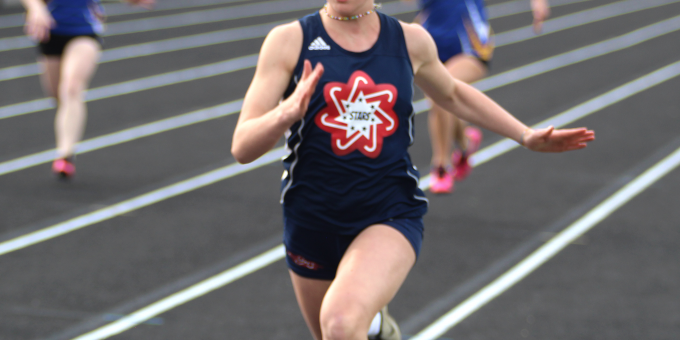 BEDFORD – Before she dashed off to dance practice, Bedford North Lawrence senior Lindley Steele dashed to a victory in the speed race. Before BNL and Mitchell seniors run off to college and military futures, they ran one final dual meet to remember their four-year run.

Their families want time to slow down. Their coaches want their times to come down. Go faster, further.

Thrust together in dual celebrations, as work on the new facilities at Mitchell is underway, the Stars and Bluejackets honored their upperclassmen during pre-meet ceremonies. Then BNL dominated the two county-rival meets, winning every race and event on Monday evening.

BNL cruised to easy victories in the team competition, recording a 110-13 win in the boys meet and a 108-21 triumph in the girls meet. That was a foregone conclusion. The issue confronting the Stars was the future – where will everyone line up for the Hoosier Hills Conference and IHSAA sectional meets? Those answers are nowhere as clear as BNL superiority.

“I like the camaraderie between the schools,” BNL boys coach Brett Deckard said. “Yes, we’re going to win the meet because of sheer numbers, but they competed. We competed, we ran hard. It was a good meet to end the season, with Senior Night.

“We pretty well know what events we’ll put them in for the conference. The sectional depends on what points we want to chase or if we want to get kids out. We will crunch the numbers.”

“Even with our limited numbers, the girls have been awesome. We’ve improved steadily. It’s putting them in the right things for them to move on. I have found out a lot about them the last few meets.”

BNL will compete in the Big Blue Relays at Jennings County on Thursday. The BNL boys have won the last two team titles in the event.