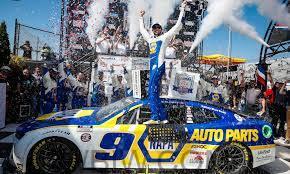 Elliott led the final 53 laps of the 400-lapper and pulled away from Ricky Stenhouse Jr. at the end in an action-packed race that was slowed 12 times for caution periods – including a red-flag weather delay on Sunday that forced the restart to Monday.

It’s the 14th career win for the driver of the No. 9 Hendrick Motorsports Chevrolet and a historic fifth win for the organization in 2022. It is the first time in NASCAR history a team has had all four of its drivers win races in the opening 11 races of a season.

There were 13 caution periods for a total of 75 laps.

Only 15 of the 36 drivers in the race finished on the lead lap.

Elliott remains the championship leader after Dover with a 50-point advantage over second-place Ryan Blaney.

Kevin Harvick earned his fifth top-10 of the season and his 23rd top-10 in 42 career NASCAR Cup Series starts at Dover.

Harvick’s 23 top-10s at Dover are the most among active NASCAR Cup Series drivers. Kyle Busch is next best with 21 top-10s. This was Harvick’s eighth straight top-10 at Dover, a run kicked off by a win in May 2018 and punctuated by another victory on Aug. 23, 2020.

“We just lost the car right there at the end of the second stage and it was plowing tight. We never really were able to find anything to make it any better. I’m not sure what happened. We’ll try to figure that out and go back to work for Darlington next weekend,” said Harvick, driver of the No. 4 Hunt Brothers Pizza Ford Mustang

This was Harvick’s second straight top-10. He finished 10th in the series’ prior race at Talladega (Ala.) Superspeedway.

“We were so behind after practice, we just didn’t get a lot of time to work on it with so many cautions, but we made it better for qualifying. We were still pretty far off Sunday when the race started, and warmer weather today really didn’t help. Johnny (Klausmeier, crew chief) and the guys did a great job working on it and, by the end, our balance was good. We just didn’t have enough time to make up some ground, and dirty air was a major factor,” said Briscoe, driver of the No. 14 Mahindra Tractors Ford Mustang

Cole Custer earned his third top-15 of the season and his fourth top-15 in four career NASCAR Cup Series starts at Dover. Since joining SHR in 2018, Almirola has only one finish outside the top-20 at Dover.

We were just fighting all day trying to make the car better. We got it decent by halfway through and we worked the pit strategy right and caught some luck and got a solid finish. The guys fought hard all day. They did a good job keeping us in the mix and we ended up making something of it,” said Custer, driver of the No. 41 Autodesk/HaasTooling.com Ford Mustang.

Since joining SHR in 2018, Aric Almirola has only one finish outside the top-20 at Dover.

“Man, we had a car capable of running top-10 all day. We didn’t have it in practice or qualifying on Saturday, and Drew (Blickensderfer, crew chief) and the guys made the right changes for the race. Unfortunately, we just got caught on pit road at the wrong time and it put us two laps down. We were still racing hard and kept our Smithfield/Weis Ford in the ‘Lucky Dog’ position, but we didn’t get the break we needed to race for a position again. All in all, we had a good car and good speed, so I’m proud of that,” said Almirola, driver of the No. 10 Smithfield/Weis Mustang.

The next event on the NASCAR Cup Series schedule is the Goodyear 400 on May 8 at Darlington (S.C.) Raceway. The race begins at 3:30 p.m. EDT with live coverage provided by FS1 and SiriusXM NASCAR Radio.