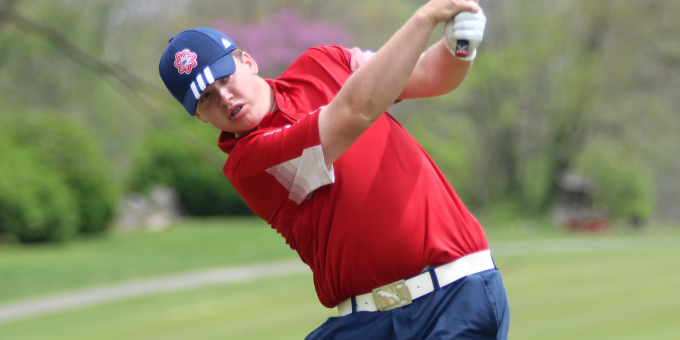 BEDFORD – When touring Otis Park, a golf course in the flight path of the nearby landing strip, always be aware of low-flying aircraft. Especially when there’s a Jett buzzing around.

Bedford North Lawrence’s Jett Jones went low, carding a career-best score while powering the Stars to a third-place finish in their 15-team Invitational on Saturday. Jones fired a 2-over 74, highlighted by four birdies, to finish second in the medalist competition.

The Stars, with Trevin Hutchinson adding a 77, finished with a team score of 319. Jasper won the event with 314, while Columbus North was second with 316.

After carding one birdie (the sixth hole) on the front and making the turn with a 40, Jones found his altitude on the back, adding birdies on the 12th, 15th and 17th holes, with strong drives setting up birdie chances.

“I was hitting my driver well, that gave me a lot of opportunities,” Jones said. “The putts were burning edges on the front, but they started falling on the back.

“My confidence has pretty much skyrocketed. I’m finally starting to play like I should out here. Hopefully I can keep doing it. There’s always a few more strokes to save. All you can do is practice and get better.”

“Jett played a great round,” BNL coach Jeff Hein said. “He had some round-saving putts, found a way to get it in.”

Hutchinson birdied the fourth and sixth holes while carding 40 on the front, then posted seven pars on the back. Houston Corbin finished with 83, and Colton Staggs (despite bunker issues) totaled 85 to cap BNL’s scoring.

“If you had told me we were going to break 320, I would have taken it,” Hein said. “That’s the second week in a row. That’s a good score for us right now, this time of the year. There are strokes we can continue to shave as we go along.

“We still have a ways to go, work to do. There are little things to refine.”

Columbus North’s Luke Schneider was the medalist with a 73. Jasper has three scores in the 70s, topped by Luke Schappard’s 77, en route to the team title.

BNL will face Edgewood and Brownstown on Thursday at Otis.