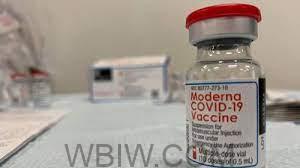 INDIANA – Moderna is seeking emergency use authorization from the US Food and Drug Administration for its Covid-19 vaccine for children 6 months through 5 years of age, the company said Thursday.

“We believe mRNA-1273 will be able to safely protect these children against SARS-CoV-2, which is so important in our continued fight against COVID-19, and will be especially welcomed by parents and caregivers,” Stéphane Bancel, chief executive officer of Moderna, said in a news release.

No Covid-19 vaccines have been authorized for children younger than 5 in the US — about 18 million people — and a timeline for potential authorization is not yet clear. Moderna officials have said the FDA is expected to move fast, and a Pfizer official suggested its vaccine for younger children could be available in June if it’s authorized.

Dr. Peter Marks, director of the FDA’s Center for Biologics Evaluation and Research, this week called vaccines for younger children “one of our highest priorities,” but acknowledged the agency needed complete applications from vaccine manufacturers in order to finish its review.

The FDA will ask its independent vaccine advisers to weigh in on vaccines for younger children, too, and Marks said the agency would release a timeline for advisory committee meetings in the next week.

In late March, Moderna announced the results of a clinical trial that included 2,500 children ages 6 months through 24 months and 4,200 children ages 2 through 5. The company said that two 25-microgram doses of its vaccine led to a similar immune response in young children as two 100-microgram doses for adults ages 18 to 25. And it said this should predict protection from Covid-19 and severe Covid-19 down to 6 months of age.

In Thursday’s news release, the company said the data showed “a robust neutralizing antibody response” and “a favorable safety profile.”

“We like to see anything above 1,000 units, and what we, in fact, saw here are levels somewhere between 1,400 and 1,800 units,” Dr. Paul Burton, chief medical officer of Moderna, said Wednesday. “So that’s extremely reassuring.”

Burton also said the vaccines were very safe for this age group. The most common reactions were pain at the injection site and fever. There were no cases of heart inflammation, or myocarditis, in the study. Heart inflammation has been an extremely rare side effect of the mRNA vaccines. Myocarditis is more common after Covid-19 infection than after vaccination.

The results announced in March were mostly collected during the Omicron wave and included home testing for Covid-19. As a result, the company said the vaccines looked less effective for children than they did for older age groups.

The data presented by Moderna Thursday limited the analysis only to cases confirmed positive by sensitive PCR tests. In the revised analysis, the vaccines were 51% effective at preventing symptoms in children ages 6 months to under 2 years; they were 37% effective at preventing symptoms in kids ages 2 through 5. The company said these efficacy estimates are similar to those among adults against Omicron after two doses.

Pfizer/BioNTech’s Covid-19 vaccine for young children has also stumbled. In clinical trials, two 3-microgram doses didn’t appear to generate the same degree of immunity for children ages 2 through 4 as they had for young adults, prompting the company to look at giving children ages 6 months through 4 years the third dose. The FDA also delayed its review of these shots until the company submits data on a third dose.

On Tuesday, Pfizer asked the FDA to green-light a third or booster dose for children ages 5 through 11. Studies have shown that vaccine efficacy has waned significantly in this age group during Omicron.

“Our lead candidate now is something against the original strain and Omicron,” he said, predicting that would be the booster formulation for the fall and winter.

“And I think for these young kids, what we’ll have to do is to continue to follow the natural history and see, what is the variant? What’s going on with the little kids as we get into the fall? And then the FDA and CDC and regulators around the world can make recommendations on whether they need another booster later in the year.”https://99faa673a263f11fdb36d1bc9901fc7e.safeframe.googlesyndication.com/safeframe/1-0-38/html/container.html

What’s next for vaccines for younger children

The FDA will evaluate Moderna’s submission and has said it will convene its Vaccines and Related Biological Products Advisory Committee to weigh in on vaccine authorization for younger children. If the FDA authorizes the shots, vaccine advisers to the US Centers for Disease Control and Prevention will vote on whether it should be recommended. The CDC director will then need to sign off on a vaccine recommendation before shots can be administered.

National Institute of Allergy and Infectious Diseases Director Dr. Anthony Fauci has said that the FDA is weighing whether to consider emergency use authorization for both the Moderna and Pfizer/BioNTech Covid-19 vaccines for young children at the same time, rather than considering them separately.