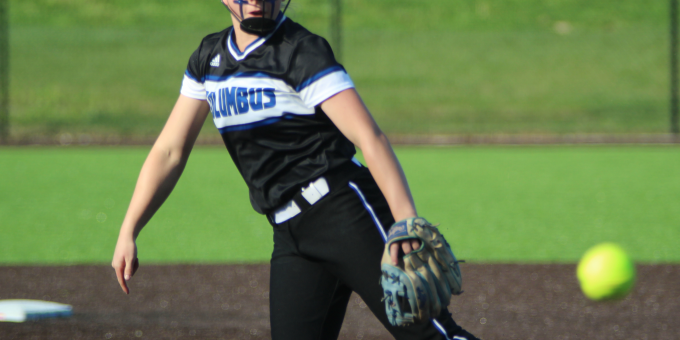 BEDFORD – Who can? Rutan.

With one swing, Columbus North star Maddi Rutan, who plays with her passion at high volume and talks as fast as one of her sizzling pitches, who wears her emotion for the world to see, ended No.3 Bedford North Lawrence’s 12-game winning streak and aura of invincibility.

Rutan’s mammoth home run to right center, leading off the top of the ninth inning, ended a classic pitching duel with BNL ace Annie Waggoner, powering the No.8 Bull Dogs to a thrilling 1-0 triumph over the Stars on Tuesday evening. Rutan, an Eastern Kentucky recruit, also did the damage in the circle, striking out 14 and allowing only a handful of singles – none of them hit dangerously hard – while silencing one of the state’s prolific offensive attacks.

Her no-doubt blast, her ninth of the season with that unmistakable sound of sweet contact, on a 2-2 pitch came on a changeup that didn’t catch the slugger off guard, that caught too much of the strike zone. She rounded the bases as quickly as her bomb left the ballpark, gliding into the waiting arms of giddy teammates at the plate.

“I was not looking for the changeup,” Rutan said. “But I was being very selectional, looking for a pitch to drive. That pitch was just there.” And then it wasn’t, headed for the hillside and BNL heartbreak.

“I’ll own it,” BNL coach Brad Gilbert said. “I called the changeup. I came into the game telling myself, if we had to intentionally walk her four times, she was not going to beat us. And I outsmarted myself. It was my fault. She squared it up. As soon as I heard it off the bat, I didn’t even look.”

That swing was all the offense. Waggoner (8-1) was brilliant, allowing only five hits while fanning 6. Her defense was solid behind her, with Kendall Graves making three outstanding plays at third base, with Carlee Kern making a sensational stop and throw from deep in the hole at shortstop. But the Stars (12-1) could not solve the Rutan mystery. Although there was nothing mysterious about it. Rutan threw hard, grunting for extra emphasis and pop, and BNL couldn’t catch up.

“She’s unbelievable, isn’t she?” said North coach Ron McDonald, who was lovin’ it. “A lot of power pitching. She had her changeup working, she was hitting her spots. She was up for the game, that’s what we need the rest of the season.

“That’s a great Bedford team. It’s sad someone had to lose that game.”

BNL had chances. The Stars got two on (Carsyn Alvey blooped a fly ball into short left field that fell untouched and McKaylin Turner reached when her bunt was misplayed) in the third. Aliza Jewell singled with one out in the seventh but pinch runner Tori Nikirk was doubled off when Carlee Kern lined to short on a hit-and-run. In the eighth, Alvey singled to center and Lauryn Anderson slapped a single to left. Rutan grunted her way out of the trouble.

“Grunt, you’ll throw a little harder,” she said with a smile. “I just enjoy this game so much. The last few games I haven’t felt like myself. I got back into it today, and my team really helped me. When you keep spirits high, good things will happen.”

“We have to score to win, and we didn’t do that,” Gilbert said, proving once against that games can’t be won 0-0. “We had a few opportunities to score and didn’t. I really wanted our hitters to figure her out. We’ll see them again a in the semistate, possibly. When she’s on, she’s on. But those are the games we have to have, to get us ready for the tournament. We knew it would be tough.

“That was a fun game. It was a battle, which we knew it would be.”

BNL will host Mitchell on Thursday.