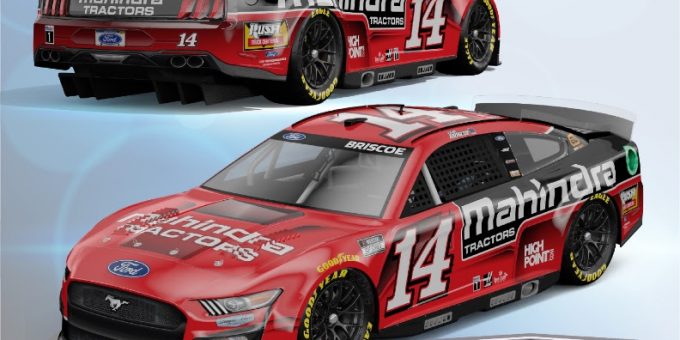 DOVER – Chase Briscoe, the driver of the No. 14 Mahindra Tractors Ford Mustang for Stewart-Haas Racing (SHR), looks to rebound at Dover (Del.) Motor Speedway this weekend following a disappointing result at Talladega (Ala.) Superspeedway. Briscoe finished 37th in last Sunday’s GEICO 500 after getting caught in a wreck on lap 56.

Ten races into the season, Briscoe is 12th in the driver standings, 122 points out of first. He currently holds a spot in the 16-driver playoff field by virtue of his win on March 13 at Phoenix Raceway.

“I’ve been running Dover on the simulator for the last two or three weeks. And I feel like, from a driving standpoint, the new car drives pretty well,” said Briscoe. “I don’t know what to expect, though, it’s hard to say. This car has raced really, really well on high-speed racetracks. Dirty air has been way less of a factor than it was in the old car. But then when we go to the short tracks, it’s kind of been the opposite. So, I don’t know where Dover’s going to fall in that. I will say the car on the simulator at least drove better than I thought it would, so I’m kind of interested to see what happens when we get there. It’s definitely going to be extremely fast in the corner. From a physical side, it’s going to be probably one of the toughest races this year, just with ride quality and the G-forces and things like that.”

Briscoe has one Cup Series start at Dover, resulting in a 35th-place finish. He started the race from 17th and ran inside the top-20 before losing a right-rear tire at the end of the first stage. Trouble plagued the No. 14 team for the rest of the race, forcing Briscoe to make additional pit stops before a visit to the garage to diagnose handling issues. Briscoe finished the event, albeit 60 laps behind the leader.

The dirt racer from Mitchell, Indiana, found his way to victory lane at the Monster Mile in the second race of the 2020 NASCAR Xfinity Series Saturday-Sunday doubleheader at the concrete oval. Briscoe started last in the Sunday race after going to a backup racecar and proceeded to lead three times for a race-high 107 laps en route to his sixth win of the season. He won the race by a commanding 2.463-second margin over second-place Ross Chastain.

” I’ve always loved going to Dover. It’s really high-speed, high-commitment, high-reward, and those are the kind of places I enjoy running,” Briscoe added. “So yeah, I’ve always enjoyed going there and I’d love to get another win there. It’s one of my favorite racetracks, especially when we can move around and run other lanes, and that’s the area I’m kind of curious to see how this NextGen car kind of plays into that. It’ll be a really fast track this weekend, so hopefully, we’ll have a fast car and be able to take advantage of it.”

In total, Briscoe has five starts in the Xfinity Series at Dover, his win in 2020 among his three top-five finishes and four top-10s. He also made one NASCAR Camping World Truck Series start at Dover in June 2017, finishing 12th after earning his first career NASCAR pole.

Mahindra Tractors, a brand of Houston-based Mahindra Ag North America, makes their first trip to the Monster Mile as the primary sponsor on the No. 14 Ford Mustang. Part of Mahindra Group’s Automotive and Farm Sector, Mahindra Ag North America is the No. 1-selling farm tractor company in the world, based on volumes across all company brands. Mahindra farm equipment is engineered to be easy to operate by first-time tractor or side-by-side owners, and heavy-duty to tackle the tough jobs of rural living, farming, and ranching. Steel-framed Mahindra tractors and side-by-sides are ideal for customers who demand performance, reliability, and comfort at a great value. Mahindra dealers are independent, family-owned businesses located throughout the U.S. and Canada.