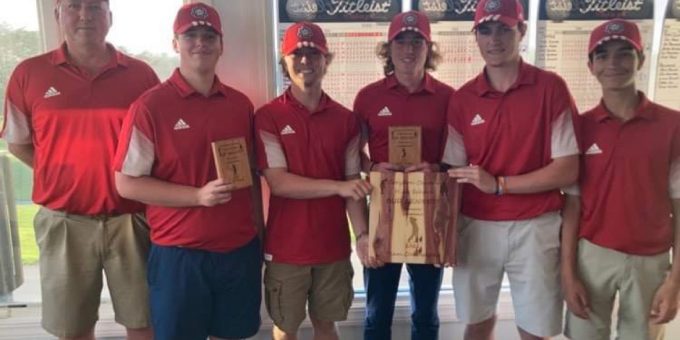 The Stars, paced by Trevin Hutchinson and Jett Jones, carded a team total of 318 to win the 14-team event. Evansville Mater Dei and Jasper tied for second at 322.

Hutchinson fired a 4-over 76 to finish tied for fourth in the field. His round included five birdies (holes 5, 6 and 8 on the front, plus holes 10 and 12 on the back). Jones also claimed an individual prize with a 76 (with two birdies on the front).

“It’s always good to put two kids in the 70s,” BNL coach Jeff Hein said. “The kids played great. We stacked them from one to four, that’s what you have to do.”

Colton Staggs added an 82 and freshman Tyler Bellush capped the team scoring with 83.

“Bellush came up big,” Hein said. “None of them had ever seen the golf course, so the kids managed the course well. The greens were fast and firm, so that’s a great score.”

Gibson Southern freshman Peyton Blackard was the medalist with a 1-under 71. Borden’s A.J. Agnew fired a 74.

BNL will host Paoli at Otis Park on Monday.