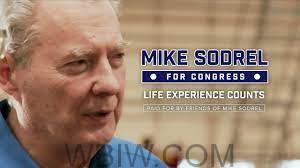 “Mike Sodrel is a proven conservative. He’s pro-life and a strong supporter of Second Amendment rights. He leads in the polls in the race for Congress in the 9th District. Mike will fight against the harmful liberal policies of Biden and Pelosi. I support Mike Sodrel because I know a fighter when I see one,” stated Kellyanne Conway.

Sodrel commented, “I am honored to have Kellyanne’s support. She is an invaluable asset to our team.”

Appointed in August 2016 as President Trump’s campaign manager, Conway is the first woman to have run a successful U.S. presidential campaign. She has previously held roles as campaign manager and strategist in the Republican Party.

Keep an eye out for the Sodrel Express coming your way! For more information on Mike Sodrel’s next stop visit facebook.com/sodrelforcongress.