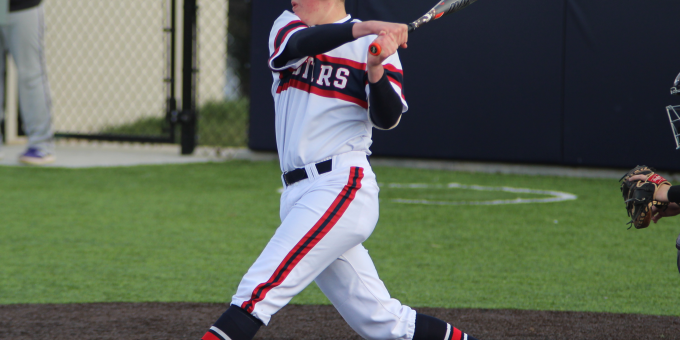 After rallying for two runs in the bottom of the seventh to pull even, Bedford North Lawrence allowed extra outs in the extra inning, and Seymour struck for two huge two-out hits that pried open the floodgates during an 11-6 triumph on Monday afternoon.

The Owls overcame multiple mistakes – five errors and four runners cut down on the bases – with a five-run explosion in the eighth, ending BNL’s recent trend of heroic comebacks and walk-off wins. The Stars (5-4, 0-1 in the Hoosier Hills Conference) learned a lesson that stands the test of time and proves truer than cybermetrics and new-age baseball math – walks haunt.

Seymour (7-3, 1-3 in the HHC) scored the go-ahead run in the eighth via two walks, an error and a sacrifice fly. Then, in almost predictable fashion, with the bases loaded, Vince Wilson flared a soft double down the left-field line, and Jack VonDielingen cracked a two-run single for insurance runs.

“We struggled throwing strikes,” BNL coach Jeff Callahan said. “That’s the way it goes sometimes. We have to make them earn it. When you walk guys, and don’t make routine plays behind the pitcher, it compounds the problems. We’ll learn.”

The level of play suffered as the temperature plunged. With the wind howling and moaning like an old man getting out of bed in the morning, the two teams combined for 9 errors and 10 walks. Only two Seymour runs were earned ones. The Stars scored two unearned runs in the seventh for the 6-6 deadlock. Survival became the test as the innings dragged.

“We made a lot of mistakes, a lot of baserunning mistakes and defensive errors,” Seymour coach Jeremy Richey said. “But I’m proud of the effort to come back and finish it. It was big for this group to find a way, especially on the road.”

BNL took a 2-0 lead in the first, as Cal Gates, Grant Dalton and Kline Woodward all started with singles off Seymour starter Bret Perry, Jonny Stone lofted a sacrifice fly for the first run and the first Seymour error allowed the next. The Owls answered with Aiden Darlage’s two-run single in the third, but BNL’s Ryker Hughes launched a double off the base of the centerfield fence to chase home a run in the bottom of that frame.

Seymour, which scored eight total runs with two outs, got a clutch RBI single by Treyton McCormick for a 3-3 deadlock in the fourth, then scored three in the fifth on a two-run double by Darlage and run-scoring single from VonDielingen.

BNL battled back. Trace Rynders reached on an infield hit and Maddox Ray lashed a double, with Dalton driving in the run on a groundout in the sixth. In the seventh, walks to Hughes and Kylar Fisher, followed by a wild pitch, set the stage for Kaedyn Bennett to reach on an error as both runs scored.

“I was proud of the way the kids battled back,” Callahan said. “We tied it up and had a chance. That’s big out of this group, to give themselves an opportunity.”

Darlage had two hits and 4 RBIs while VonDielingen had three hits and drove in three runs. Perry went 6 1/3 innings on the mound, throwing 104 pitches, before McCormick got the win in relief.

“Aiden’s been huge for us the last couple of weeks,” Richey said. “He’s coming up with guys on base and squaring the ball up really well. He’s done so many good things.”

Hughes had three hits and Ray totaled two for the Stars.